VW Expands EV Production in US

The company picked Tennessee for its North American base for electric vehicle production. 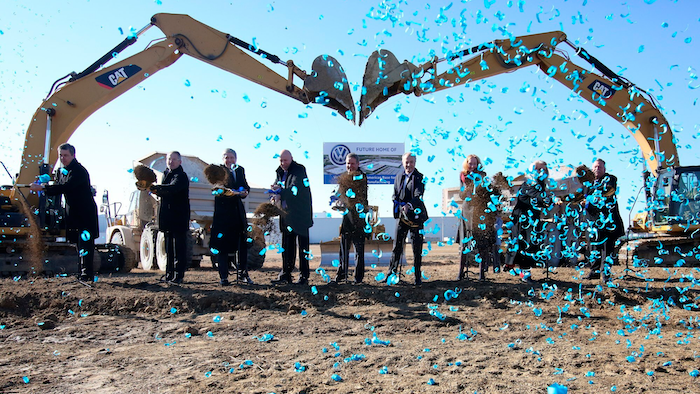 CHATTANOOGA, Tenn. (AP) — Volkswagen is making Tennessee its North American base for electric vehicle production, breaking ground on an $800 million (727 million euro) expansion at its plant in Chattanooga.

Volkswagen of America CEO Scott Keogh was at the factory Wednesday for the expansion’s groundbreaking ceremony. In an announcement from Volkswagen, Keogh called it a “a big, big moment” for the company.

“Electric vehicles are the future of mobility and Volkswagen will build them for millions, not just millionaires," Keogh vowed.

The move toward electric vehicles underscores the company's effort to transform itself after the 2015 diesel scandal, in which Volkswagen was caught using software to cheat on emissions testing.

Further cementing a more-eco-friendly image, the company also announced a partnership with The Conservation Fund to protect and restore land in the U.S.

Senior Executive Vice President for Public Affairs David Geanacopoulos, speaking in Chattanooga on Wednesday, said Volkswagen’s first donation will expand the nearby Cherokee National Forest by about 1,500 acres (600 hectares), according to a release from the company.

The zero emission vehicle has the working name “ID. CROZZ.” ID stands for intelligent design. Initially it will be made in Germany. Once Volkswagen completes a 564,000-square-foot (52,397-square-meter) addition to the Chattanooga body shop, production is expected to begin there in 2022. The company is also adding a 198,000-square-foot (18,394-square-meter) plant for the assembly of battery packs.

Volkswagen currently builds the midsize Atlas SUV and the Passat sedan at the Chattanooga factory. A five-seat version of the Atlas, called the Atlas Cross Sport, began production there in October and goes on sale early next year.

Both internal combustion engine vehicles and battery electric vehicles will be built on the same assembly line. The plant, which employs about 3,800 people, will add about 1,000 new jobs.

Attending the groundbreaking were Tennessee Gov. Bill Lee, German Ambassador to the U.S. Emily Haber, and other state and local officials.