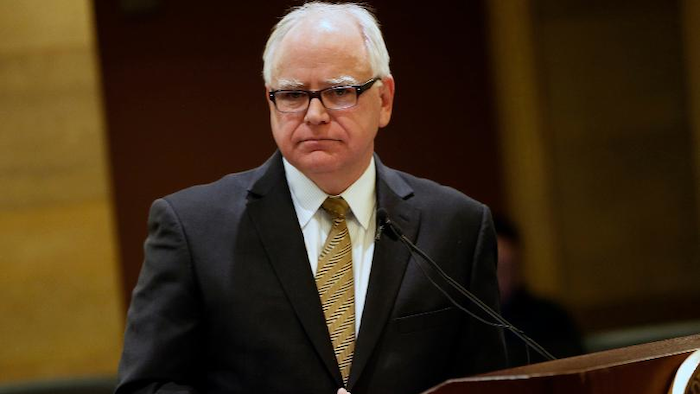 MINNEAPOLIS (AP) — Gov. Tim Walz is on a crusade. He wants to lower carbon emissions from Minnesota's transportation sector, and says his latest plan to adopt California rules for tailpipe emissions could help make a dent, in part by invigorating a lagging market for electric vehicles.

"If we had more choices and there were more used low-emission vehicles, we'd buy those," Walz said in October.

California, after all, leads the nation in electric car sales, while Minnesota ranks closer to the national average. But Walz's plan has also raised some basic questions about the policy's tactical goals: Is Minnesota's car market really in need of a fix? And do consumers in the state really lack options for buying plug-in cars if they want them?

Those rules — if they withstand a challenge from the Trump administration — can differ from national regulations and require auto manufacturers to create cars that pollute less and provide more electric, plug-in hybrid or hydrogen-powered cars for sale. California has long held unique authority to combat smog through the rules, but a swath of states such as Colorado and Vermont have adopted the rules as well.

The Minnesota Department of Transportation (MnDOT) in September recommended using the California rules to cut carbon emissions from the transportation sector, which now produces the state's largest share of greenhouse gas emissions. And officials from the Minnesota Pollution Control Agency (MPCA) have recently been traveling across the state to hear feedback on the idea before it moves ahead with implementing the rule.

One justification MnDOT had for the ZEV rule in particular is to offer Minnesotans more choice in buying electric cars, making it more likely for consumers to own one. An agency report released in September said there were just 19 models of electric cars available in Minnesota in January, compared to 43 total models available in the U.S.

Buying electric vehicles is even tougher outside of bigger cities, and the MPCA has distributed information showing little or no availability of popular models like the Chevy Bolt and the Mitsubishi Outlander SUV outside of Minneapolis.

In 2018, the electric vehicle market in Minnesota was just 1.14% of overall car sales in the state, which compared to other states, rated between the median share of sales at 0.96% and the average at 1.33%. California leads the nation with an EV market that accounts for 7.84% of overall car sales, while Washington state is second with 4.28%.

The Walz administration contends that electric vehicles' small market share in Minnesota is not due to lack of interest. The governor has trumpeted a survey from Consumer Reports that says 60% of prospective car buyers in the state are interested in electric vehicles and 66% of those surveyed want to choose from more types of electric vehicles, such as SUVs and pickup trucks.

"If we do this, they will sell them," Walz said of car manufacturers complying with his proposed rules. "People will buy them and the market will work."

But the electric vehicle market may not be as bad as the Walz administration has portrayed it to be. When asked which electric car and plug-in hybrid models are available in Minnesota, a MnDOT spokesman forwarded a list created by Jukka Kukkonen, an electric vehicle consultant who also works for the local nonprofit Fresh Energy.

As of October, Minnesota actually had 28 of 42 models available nationwide, according to Kukkonen's website PlugInConnect. And Minnesota is not missing out on many popular models: nine of the 10 best-selling electric or plug-in hybrid cars in the U.S. are available in Minnesota, as are 12 of the top 15.

The nation's top-selling electric car is the Tesla Model 3, and the Model X and Model S are in the top five. MnDOT data shows nearly a third of the 10,000 electric cars and plug-in hybrids on the road in Minnesota are Teslas.

Minnesota is one of 27 states with a Tesla store or gallery, which are run by the company, not through franchised dealerships. Wisconsin, Iowa, South Dakota and North Dakota do not have Tesla stores.

Three popular electric car models Minnesota does not have, according to Kukkonen's list, are light-selling, expensive Mercedes-Benz luxury cars, such as the S560e model ($103,000 after a federal tax credit for electric cars) and the GLC550e ($62,240 after tax credit).

Amber Backhaus, vice president of public affairs for the Minnesota Auto Dealers Association, which has opposed the governor's plan, said MPCA's data on the lack of electric cars outside of the Minneapolis area can at times be misleading.

For instance, in a presentation to the Minnesota Chamber of Commerce, state officials said there are no Mitsubishi Outlander SUVs, Kia Niro SUVs or Subaru Crosstreks available for sale in Bemidji, Fergus Falls and Marshall. But Backhaus said there are no Mitsubishi, Kia dealers or Subaru dealers at all in those cities. "That won't change with or without the mandate," she said.

Even so, in an interview Kukkonen stood by the Walz administration's assessment of Minnesota's electric car market. While some electric or plug-in hybrid vehicles may technically available, manufacturers don't provide enough of them to make them easily accessible to consumers.

Kukkonen said one reason Tesla is so popular is that its Eden Prairie dealership has a host of options ready for customers. Manufacturers do send more cars to states that adhere to the zero-emission vehicle, or ZEV, rules, in part because they're required to provide more electric cars and plug-in hybrids.

Hyundai is one of the most prominent auto companies missing from Minnesota's electric vehicle market. None of its four electric or plug-in hybrid cars are available for sale in the state, according to Kukkonen's list, and all are among the cheapest models around, priced at less than $30,000 after the federal tax credit.

When asked why the cars were not for sale, and what might entice them to enter the market, Hyundai spokeswoman Michele Tinson said the company first rolled out its Kona EV in California, followed by "ZEV-focused states in the western and northeastern regions of the U.S. market."

"Minnesota is not considered a ZEV-focused state," Tinson said.

Tinson said their two Ioniq brand vehicles actually are available across the U.S., but said it's "up to each individual dealer to determine their selected vehicle inventory."

Scott Lambert, president of the Auto Dealers Association, said electric car sales aren't hurt by the number of cars manufacturers currently provide. He said dealerships ask manufacturers for the cars they want based on customer demand, and more customers simply want SUVs and trucks rather than the electric cars available in the country.

Especially given Minnesota's cold and dark weather, Lambert said, it makes sense some of the small electric or plug-in cars, such as the mini Fiat 500e or Smart ForTwo ED, are not available in the state.

If auto manufacturers create more ZEV SUVs and trucks and prices drop, customer interest could change, he said. "We just don't find there to be big demand," Lambert said. "Dealers can get vehicles now. If people want vehicles, different models, that's not difficult to do."

If Walz's rules are adopted, the auto dealers say it could reduce vehicle sales because they would have to take popular cars off their lots to make way for electric ones and lower-emitting ones since auto dealers would be required to send more to the state. Colorado's government also studied the ZEV rules before adopting them late last year; it concluded in a report that auto dealers and mechanics would lose business from vehicle maintenance and repairs that are more common in gasoline-powered cars. The report also found that auto dealers may have to pay more for advertising and training of staff to market electric cars (though it also found that consumers will save money on gas and maintenance as a result of buying more electric or plug-in hybrid cars).

Lambert said the state would be better off boosting incentives for electric cars to be more popular rather than forcing dealerships to hold more cars people aren't interested in. "If this is what government wants to do, then they should find a way to make them more attractive to customers," he said.

The nonprofit news outlet MinnPost provided this article to The Associated Press through a collaboration with Institute for Nonprofit News.