Sales for the latest quarter grew both in Japan and overseas, including in the U.S., the rest of Asia and Europe. 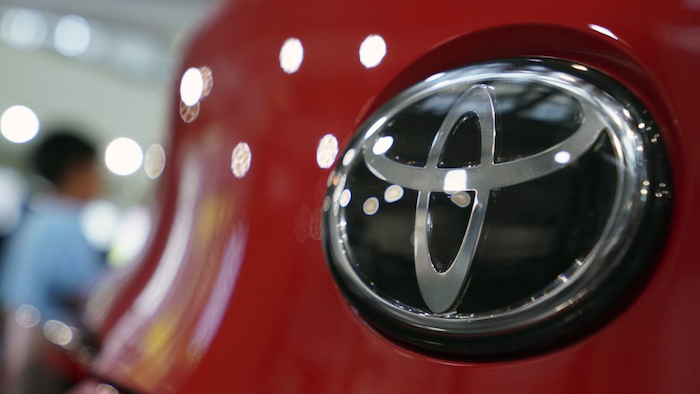 In this Aug. 2, 2019, file, photo, people walk by the logo of Toyota at a show room in Tokyo.
AP Photo/Eugene Hoshiko, File

Toyota, which makes the Prius hybrid, Corolla subcompact and Lexus luxury models, stuck to its net profit forecast for the fiscal year through March 2020, at 2.15 trillion yen ($20 billion).

That would be an improvement over the 1.88 trillion yen earned in the year ended in March.

Vehicle sales for the latest quarter grew both in Japan and overseas, including in the U.S., the rest of Asia and Europe.

Like most Japanese exporters, Toyota has been hurt by a strengthening yen. But the results show Toyota is holding up despite such negatives.

For the fiscal first half, cost cuts and marketing efforts offset the impact of an unfavorable exchange rate, it said.

Toyota also said it will buy back up to 200 billion yen ($1.8 billion) worth, or 34 million shares, of the company's common stock.

Toyota officials have stressed the company is focused on becoming a "mobility company" for a future when consumers may opt for new ways of car ownership like car-sharing, or choose futuristic electric vehicles instead of automobiles common today that run on gasoline.

"We are in a phase of transforming ourselves to a mobility company and proactively undertaking investments for the future and creating friends," said Toyota's operating officer, Kenta Kon.

Although Kon did not go into details, the "friends" Toyota has been courting lately in partnerships include those historically not associated with the traditional auto industry, such as robotics and internet companies.

On Thursday, Toyota and Chinese automaker BYD Co. said they have agreed to set up a joint company to research, develop and design electric vehicles as well as platforms for such vehicles together. The new research company will be set up in China in 2020, with each company holding a 50% share, they said.