Ford Contract Headed to a Vote 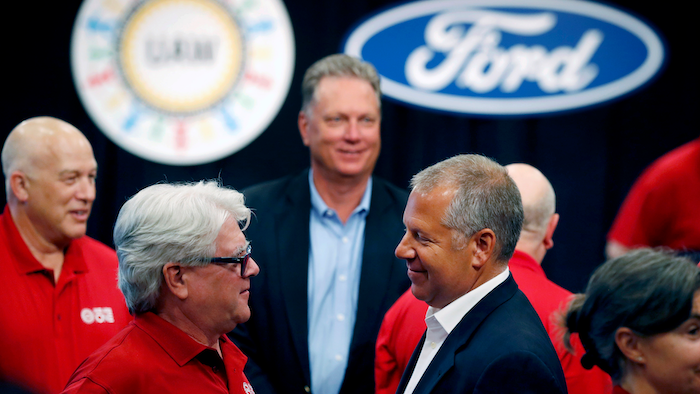 DETROIT (AP) — Union workers at Ford will start voting Monday on a proposed four-year contract that includes wage increases and more than $6 billion for investments at 19 plants.

The United Auto Workers said Friday that its National UAW-Ford council voted to send the deal to 55,000 workers for a ratification vote.

The Ford workers would get 4% lump-sum payments in the first and third years of the contract, and 3% wage increases in the second and fourth years, according to a summary posted by the union. Workers would see no reduction in health care benefits and won't pay more for their coverage. New hires will reach the top pay scale sooner.

They would get ratification bonuses of $9,000 — less than the $11,000 bonuses that workers at General Motors won last month, but they didn't endure a lengthy strike like their counterparts at GM.

The union said the Ford agreement includes the promise of investments that will create or save more than 8,500 jobs.

The Romeo engine plant in Michigan will close. The union said workers will be transferred to a nearby transmission shop or offered early-retirement buyouts. The UAW said it got a moratorium on other plant closures for the life of the contract.

Union officials will begin presenting the terms to members around the country this weekend. Voting is scheduled to start Monday and run until Nov. 15.

The deal was reached relatively quickly and without the conflict that led to a 40-day strike by UAW members against GM.

Art Wheaton, director of a labor institute at Cornell University, said the long walkout at GM helped Ford and the UAW settle faster.

"They use the pattern from GM, and the UAW Ford membership knows they got a reasonable deal," he said. "The $6 billion in investments is a good deal for both parties."

Many of the investments will focus on building trucks like the F-150. Some of the spending and products, according to the union:

If Ford workers ratify the contract, the union will begin bargaining with Fiat Chrysler, which announced Thursday that it plans to merge with France's PSA Group to create the world's fourth-largest auto company, worth $50 billion.