Electric motor scooters are already being purchased by hundreds of thousands of consumers in Asia. 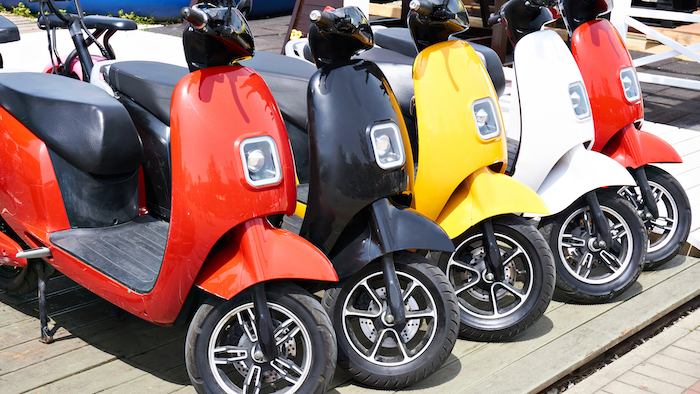 When it comes to electric cars, 2019 has been a big year. Tesla ramped up production of its Model 3 sedan, Audi launched its e-Tron all-electric SUV, Porsche unveiled the Taycan sports car, and perhaps the most significant of all, Daimler announced that it has no plans to develop next-generation combustion engines, but instead will focus on electrification.

Cars dominate personal transportation in developed countries, but in the developing world, two-wheelers – motorcycles and motor scooters – account for the majority of vehicles on the road. China and India are the two largest markets for two-wheelers, which contribute to their air pollution problems. About 20% of the CO₂ emissions and 30% of particulate emissions in India are due to two-wheelers.

Among the world’s 50 most polluted cities, 37 are in India and China. That’s why there is a pressing need to examine this sector closely. But for electric vehicles to become mass market products, batteries need to improve, and we have studied what those requirements are.

In an earlier Conversation piece, we discussed a simple approach to estimate the energy an electric vehicle would need to carry on board – usually in the form of a battery – for a given driving range.

In much the same way, in a recent research paper, we analyzed the battery requirements for electric two-wheelers to better understand the cost requirements to compete with gasoline-powered motorcycles and scooters.

We found that for a range of about 100 kilometers (60 miles), a battery pack of about 2.5 kiloWatt-hours is needed. This is about eight times smaller than the battery pack needed for driving the same range in an sedan. A distance of 100 km is the upper limit of the typical daily driving range for two-wheelers, although gas-powered two-wheelers can cover up to 300 km with a full tank of gas.

Examining the trade-offs between different factors – price, battery range and average speed – gives engineers an idea of when electric two-wheelers will become a more compelling alternative to gas-powered scooters and motorcycles.

To move, a vehicle has to resist three forces: drag, or resistance from the wind; friction from the road; and inertia, or resistance to a change in speed. These factors all influence energy storage capacity – and thus battery size.

In an electric sedan or SUV, space and weight constrain the battery pack size. But this is not a bottleneck for electric two-wheelers because their total storage needs are substantially lower, as they are smaller vehicles and carry less cargo.

The specific energy of commercial batteries, or the amount of energy stored relative to their weight, is generally improving. This has a significant impact on the driving range of larger electric vehicles. But since the total energy capacity needs of two-wheelers are lower, this ongoing technical progress provides a negligible increase in driving range for a given scooter or motorcycle.

The general trend on battery prices is downward, going at a rate few have predicted. The battery cell price broke the $100/kWh barrier in 2018 for high-volume markets, such as electric vehicles, and cost declines are expected to continue over the next decade.

Given the small battery pack, electric two-wheelers can be charged easily from a regular wall socket. To explore these aspects, we worked with the CEO of electric scooter maker Ather Energy and the principal adviser to Indian policy think tank NITI Aayog to better understand charging in India.

Data from Ather Energy indicate that a large majority of electric two-wheeler owners tend to charge at home. Hence, a policy push toward establishing residential charging facilities, especially in large residential buildings like apartment complexes, would have a positive impact on adoption and utilization.

Advances in the performance metrics of batteries and cost reductions are spurring a revolution in micromobility in general. In addition to electric scooters, a market is emerging for electric mopeds, one-wheel scooters and skateboards, each with a range around 10-20 kilometers, or six to 12 miles. Vehicle trips under six miles are about 60% of total trips; in terms of person miles traveled, they make up only about 15%, according an analysis from Ark Investment, citing U.S. government data.

Our analysis shows that there are three key trade-offs when it comes to engineering electric two-wheelers: battery pack storage capacity, which translates into driving range; the average speed of the drivers; and the cost per kilowatt-hour. Electric motor scooters are already being purchased by hundreds of thousands of consumers in Asia – there’s even an electric version of the iconic Indian scooter called the Bajaj Chetak.

Once manufacturers can make two-wheelers that achieve a range of 100 kilometers at a comparable price to gas-powered vehicles, we believe even more consumers will opt for the electric option.

This article is republished from The Conversation under a Creative Commons license. Read the original article here: http://theconversation.com/better-batteries-are-fueling-a-surge-of-electric-scooters-in-india-and-china-124387.