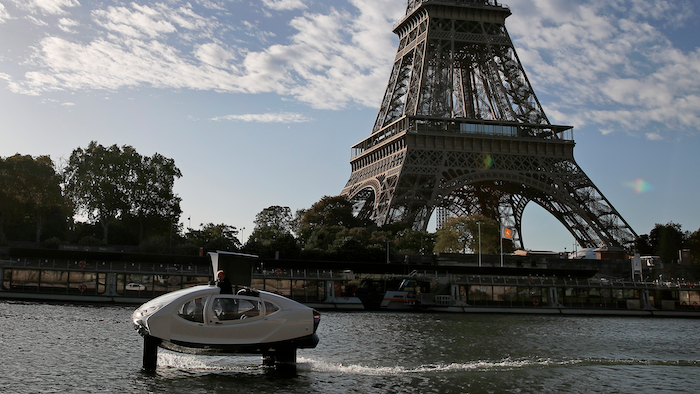 SeaBubbles co-founder Anders Bringdal onboard a SeaBubble by the Eiffel Tower on the river Seine, Wednesday Sept. 18, 2019.
AP Photo/Francois Mori

PARIS (AP) — Paris is testing out a new form of travel: an eco-friendly bubble-shaped taxi that zips along the water up and down the Seine River.

The boats can fit four passengers, and if they get approved, can be ordered on an app like land taxis, shared bikes or other forms of transport.

Its designers hope to run the so-called Seabubbles commercially in Paris and other cities starting next year.

Anders Bringdal, SeaBubbles CEO, told The Associated Press that "the most important for us is no noise, no waves, no pollution. And bring them into cities that are congested."

Bringdal said the water taxi will "not only be fun" but also makes economic sense.

Proponents see the vehicle as a new model for the fast-changing landscape of urban mobility.