Missouri Hyperloop Could Debut in 7 Years

From Kansas City to St. Louis in 30 minutes.

"We've already completed a feasibility study, and now we're on to the next steps with this. It's happening quicker than even I would have guessed," said KC Tech Council President Ryan Weber, who is working with numerous other Missouri officials on a project that he predicted could be implemented in about seven years.

Hyperloop is a cutting-edge technology that transports passengers in a vehicle floating above a track via magnetic levitation. It moves by electric power through a depressurized, low-friction tube at airline speeds. A test pod exceeded 240 mph in 2017, and the vehicles are envisioned to reach speeds of up to nearly 700 mph.

More testing is needed to get the technology past the experimental stage.

Late last year, Black & Veatch found that a route along Interstate 70 in Missouri was realistically feasible to construct.

Officials are eager for Missouri to be an early adapter of the technology. One advantage is that the state owns most of the right-of-way along I-70, although some land acquisition challenges remain and the overall costs are projected to be $7 billion to $10 billion, Harvest Public Media reported.

Yes, Weber conceded, the project would be enormously expensive, and numerous questions must still be answered. But he said the relatively flat I-70 route from Kansas City to Columbia and St. Louis is ideal. It makes more sense, he said, to invest in a futuristic, energy-efficient transportation mode that moves people quickly and efficiently than to spend billions on new lanes of traditional highway traffic.

Kansas City lawyer Greg Kratofil, chair of Polsinelli's technology transactions group, said motorists are all too familiar with the terrible road conditions currently on I-70, as they drive from Kansas City to the University of Missouri and eastward to St. Louis.

Hyperloop, he said, would be a "fundamental change in transportation," providing a 15-minute trip to Columbia or about 30 minutes to St. Louis, which would help rural residents along the route as well.

While the project costs appear astronomical, a "Blue Ribbon" panel of Missouri civic and business leaders and elected officials formed earlier this year to explore the specifics of funding and construction.

Weber said an update is expected from the panel later this month or early in October.

"I don't think there's an appetite for this to be taxpayer funded," he said. "I think this has to be likely a public-private partnership where I do think there are a number of investors out there extremely interested in this system."

Kristen Hammer, business development manager with Virgin Hyperloop One in Los Angeles, said two others U.S. routes are under consideration: Pittsburgh to Chicago and Dallas to Laredo, Texas. But she said she's been impressed with Missouri's commitment to the project and the pace of planning in the state.

Hammer said Virgin Hyperloop did a successful quarter-mile test in Nevada and is now scouting locations for a test of several miles, working with state and federal regulators.

"The next step," she said, "is a longer test that we really are looking forward to using for certification of the technology."

On Saturday, the public can see the Virgin Hyperloop One XP-1 pod that successfully accelerated to test speeds of over 240 mph on the Nevada test track. It will be on display at the Kansas Speedway during the American Royal Barbecue, and company executives will be present to answer questions.

Hammer said the system's safety is paramount and will be fully vetted. She said it is also designed to provide a comfortable ride, without excessive G-forces.

"So you'll actually feel less of that pushback than you do when taking off on an airplane," she said.

Finally, the cost to passengers would be less than a tank of gas to drive from Kansas City to St. Louis. "That's really our goal," Hammer said. "If people can't afford to take it, then we're just building an amusement park ride, and that's not our business." 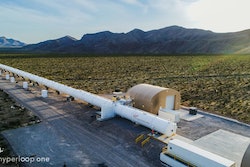