The state Air Quality Control Commission will require at least 5% of vehicles sold in the state by 2023 to emit zero pollution. 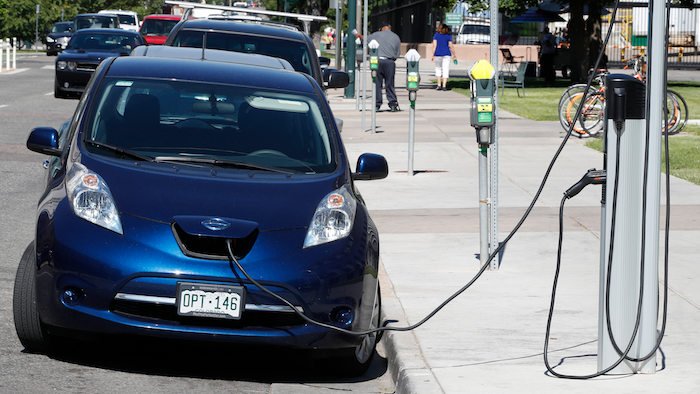 In this June 26, 2018, file photo, a Nissan Leaf at a recharge station in downtown Denver.
AP Photo/David Zalubowski, File

DENVER (AP) — Colorado tightened its air quality regulations on Friday, requiring that at least 5% of the vehicles sold in the state by 2023 emit zero pollution.

The state Air Quality Control Commission, which passed the rule on an 8-1 vote, said the requirement applies to auto manufacturers, not buyers. It's intended to boost the number of electric vehicles in a state struggling to control ozone pollution in its most heavily populated area.

Colorado is the 11th state to adopt zero-emission standards, according to Green Car Reports, which tracks developments in low-pollution vehicles.

Two auto industry groups, Global Automakers and the Alliance of Automobile Manufacturers, applauded the rule. They said they had been working with Colorado officials on how to structure the requirement.

Environmental groups also welcomed the standards, but the Colorado Freedom to Drive Coalition called them costly and ineffective.

"We believe commissioners did a disservice to all Coloradans, but especially Coloradans of modest means," coalition spokeswoman Sara Almerri said.

Regulators said the zero-emission standard is aimed at reducing ozone and greenhouse gases, which contribute to climate change.

Democratic Gov. Jared Polis directed the Air Quality Control Commission to set a zero-emissions standard shortly after he took office in January. In a statement Friday, he said the new rule was "only the beginning" of the state's work to reduce air pollution.

Excessive ground-level ozone has plagued Colorado's urban areas for years. Ozone is the main component of smog and can aggravate asthma and contribute to early deaths from respiratory disease. It's created from pollution emitted by vehicles, the oil and gas industry and other sources.

Last week, the U.S. Environmental Protection Agency said Denver and the northern Colorado urban corridor failed to meet federal ozone standards and said the state must come up with a new plan to clean up the air.

The state is also rewriting air pollution rules for the oil and gas industry.