Dire predictions from top Tennessee Republicans follow a blueprint from five years ago as workers at the Chattanooga plant again weigh a union vote. 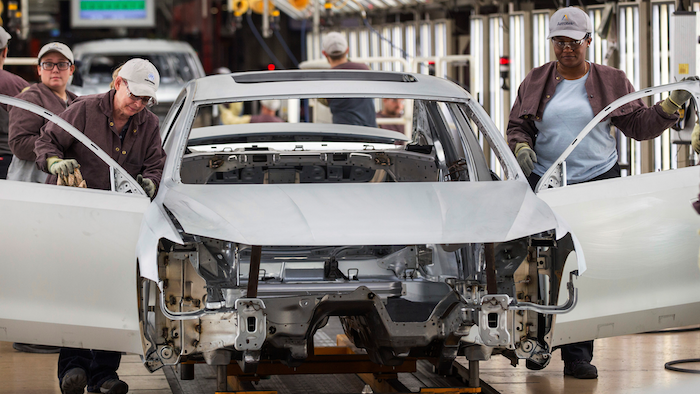 Volkswagen workers in Chattanooga voted 712-626 against unionization through the Detroit-based United Auto Workers in 2014, heeding the advice of then-U.S. Sen. Bob Corker, then-Gov. Bill Haslam and other GOP officials who urged a "no" vote.

During that election, Corker waited until voting had actually started at the plant in his hometown when he all but guaranteed that the company would announce within two weeks of a union rejection that it would build a new midsized sport utility vehicle at its only U.S. factory, instead of sending the work to Mexico.

After the loss, a smaller bloc of Chattanooga workers voted for union representation in 2015, but Volkswagen refused to bargain with them unless all hourly workers had a vote. Instead of dragging out the fight over the smaller group, the union has been granted next week's vote for all 1,700 of the plant's hourly workers.

Other than the smaller vote at Chattanooga, the UAW has not fully organized a foreign-owned auto assembly plant in the traditionally anti-union South. A 2017 vote at the Nissan plant in Canton, Mississippi, failed by a wide margin.

"The fact that a union win is even possible would send a broader message," said Harley Shaiken, a professor at the University of California at Berkeley who specializes in labor issues.

Corker and Haslam have left office, but their Republican successors are offering similar anti-union warnings as the June 12-14 UAW vote approaches at Volkswagen.

In April, Republican Gov. Bill Lee drew cheers and jeers when he told VW employees in a closed-door meeting that he believes "when I have a direct relationship with you, the worker, and you're working for me, that is when the environment works the best," according to a recording obtained by Labor Notes, a pro-union publication.

The UAW has pointed out that Lee headlined a January announcement at the Spring Hill General Motors plant, which has 3,000 production and skilled trades workers represented by UAW. Additionally, German-owned Volkswagen has union representation at all of its other major plants worldwide.

When asked by reporters whether he felt differently about union representation at the two facilities, Lee didn't get into specifics.

"As governor, one of my primary jobs is as an economic and community development advocate, so bringing jobs to Tennessee," Lee told reporters. "The reality is that it's more difficult to recruit companies into states that have a high level of union activity."

Republicans, including U.S. Sen. Lamar Alexander, the former governor who helped bring General Motors to Spring Hill decades ago, have praised the state's law that bars employers from requiring workers to pay dues if their workplace has a union shop. More than half of states have similar laws, including the entire South and some more union-friendly states like Michigan and Wisconsin.

Volkswagen has said it's neutral on the upcoming vote. Three Democratic U.S. senators — Sherrod Brown of Ohio and Gary Peters and Debbie Stabenow of Michigan — questioned that in a letter, saying they've heard Chattanooga supervisors are having anti-union conversations with workers. They also worried about Volkswagen's support for a procedural move that temporarily held up the setting of a vote date through the National Labor Relations Board, now with a majority appointed by President Donald Trump.

This year's vote has already seen TV advertising. UAW calls for workers to have a say over their schedules, "fair and simple bonuses" and respect in the workplace. Meanwhile, an anti-union group from the 2014 vote has resurfaced with its own TV ad that calls UAW desperate for new members amid plant closings.

Additionally, a third-party group is attacking VW over its 2015 emissions scandal.

UAW claimed "interference by politicians and outside special interest groups" swayed the 2014 election. The union ultimately dropped an appeal of that vote. It hoped the decision would pressure Republican politicians into quickly approving economic incentives for an expansion, which some GOP lawmakers claimed the appeal was holding up.

Experts had said the challenge was likely to fail because it targeted the actions of third-party politicians, not company management.

Volkswagen announced a new SUV would be produced in Chattanooga five months after the vote, essentially confirming Corker's prediction but on a different timeline.

Another big project is looming in Chattanooga this time around. But politicians have not publicly linked its fate to the union vote.

An $800 million expansion is planned for Volkswagen in Chattanooga, where the company expects to create 1,000 jobs as the factory gears up for electric vehicle production beginning in 2022. The project is due a $50 million state infrastructure grant in the budget that begins in July.

The state's economic development department has received no indication that the project would somehow hinge on the union vote, said department spokesman Scott Harrison.