Japanese prosecutors said they have indicted Carlos Ghosn on fresh breach of trust charges that expand their allegations of financial misconduct outside Japan. 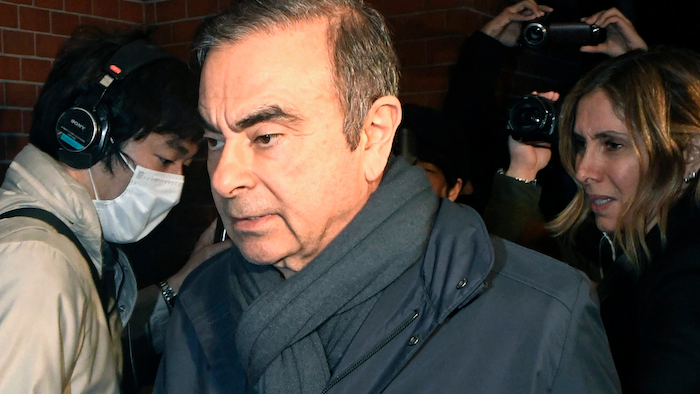 In this April 3, 2019, photo, former Nissan Chairman Carlos Ghosn returns to his residence in Tokyo.
Mizuki Ikari/Kyodo News via AP

After the indictment, Ghosn's lawyers filed a request for his release on bail, the Tokyo District Court said.

The charges filed Monday are related to payments by a subsidiary of the Japanese automaker that allegedly went to a private investment company controlled by Ghosn.

Ghosn, 65, was arrested in November. He says he is innocent of all financial misconduct charges against him.

The indictment, Ghosn's fourth, was expected and it ensures he will remain in detention unless his request for bail is granted. Ghosn's current period of detention would have expired Monday if he had not been charged. A decision on the bail request could take days as prosecutors and defense lawyers argue over conditions for his release.

The Tokyo District Prosecutors' Office said in a statement that Ghosn caused $5 million in financial damages to Nissan by siphoning off half of $10 million that he had a Nissan Motor Co. subsidiary transfer to an overseas sales agent for the automaker in 2017 and 2018.

The indictment alleges that Ghosn diverted $2.5 million in July 2017 and another $2.5 million a year later from the sales agent to his private investment company for his personal benefit.

Japanese media speculated that prosecutors are nearing the end of their investigation, but Tokyo deputy-chief prosecutor Shin Kukimoto said Monday he could not comment on whether any fresh charges might be filed against Ghosn.

"I can only say we are confident that we have gathered enough evidence to win convictions in all four counts of charges," he said.

Nissan said Monday in a statement that it had filed a criminal complaint against Ghosn related to the indictment. It said it had determined that the payments in question "were in fact directed by Ghosn for his personal enrichment and were not necessary from a business standpoint."

"Such misconduct is completely unacceptable, and Nissan is requesting appropriately strict penalties," it said.

Ghosn was released on 1 billion yen ($9 million) bail in early March under strict conditions pending his trial. Prosecutors re-arrested him a month later. He is being held at the Tokyo Detention House for questioning.

Ghosn has said that payments prosecutors say amount to breaches of trust were legitimate business transactions. He also contends that a charge that he underreported his compensation involves payments that were never paid or decided upon.

Rearrests of suspects released on bail, which is allowed only after indictment, are unusual. The handling of Ghosn's case has triggered criticism of Japan's criminal justice system, where lengthy detentions of suspects during investigations are routine.

Ghosn's wife Carole Ghosn has criticized the prosecutors' handling of the investigation of her husband, accusing them of mistreating him. Kukimoto, the prosecutor, said Ghosn has been treated just like any Japanese suspect.

"We maintain appropriate detention conditions, and (Ghosn) is not treated any worse than his Japanese counterparts. We never deprive him of meals or of sleep at night," he said.

One of Ghosn's lawyers, Takashi Takano, said his client has been interrogated an average of four hours a day without the presence of his lawyer despite demands that the practice be stopped.

Nissan's French alliance partner Renault SA sent Ghosn, a citizen of Brazil, France and Lebanon, to the Japanese automaker to turn it around when it was on the brink of bankruptcy 20 years ago. Nissan is 43% owned by Renault, which is partly owned by the French government.

In a video statement released this month after his arrest, Ghosn accused some Nissan executives of plotting against him out of fears that Renault would take over the Japanese car maker.