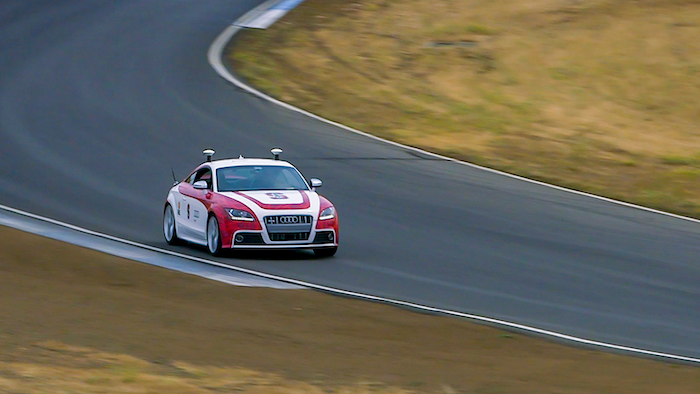 The system built by Stanford engineers allowed its autonomous Volkswagen GTI to match both existing driving systems and a race car driver during tests on a northern California race track.

But its ability to learn from past driving experiences, scientists said, could allow it to eventually match or best the top human drivers — even when conditions are less than ideal.

“We want autonomous vehicles to work in many scenarios, from normal driving on high-friction asphalt to fast, low-friction driving in ice and snow,” said graduate mechanical engineering student Nathan Spielberg, the lead author of the paper published in the journal Science Robotics.

Friction, however, is difficult to predict. Stanford engineers sought to address that problem with a neural network that incorporates information gleaned from physics and, crucially, data from past driving experiences.

The Stanford tests in Willow, Calif., relied on previous trips around the Thunderhill Raceway and as well as a trial of the autonomous VW near the Arctic Circle.

Stanford's autonomous Audi TTS, which used a conventional self-driving system pre-loaded with information about the Thunderhill course, performed about as well as a human driver over the course of 10 trials, and the VW with the neural network matched them — despite lacking pre-programmed information about the friction on the track.

The system’s learning capabilities, moreover, could eventually be bolstered by data from the many other autonomous driving projects around the world, scientists noted.

“With the techniques available today, you often have to choose between data-driven methods and approaches grounded in fundamental physics,” said Stanford engineer J. Christian Gerdes. “We think the path forward is to blend these approaches in order to harness their individual strengths.”