A Port of Los Angeles facility, operated for Denmark's Moller-Maersk by APM Terminals, plans to use battery-powered, self-guided handling equipment. 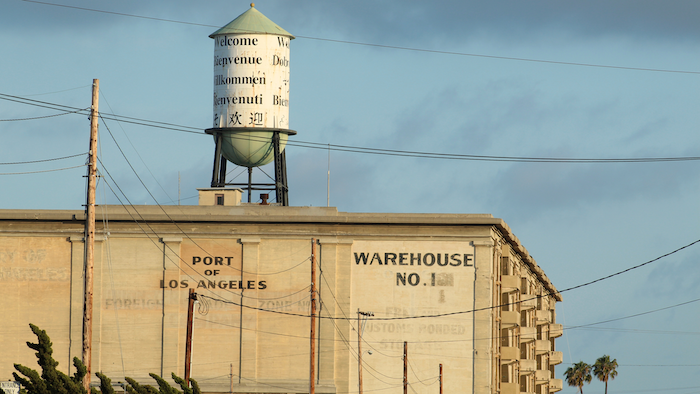 Dockworkers fearing increasing automation will cost jobs in the Port of Los Angeles are fighting use of driverless electric cargo trucks.

The issue drew union members, local business owners and activists to a hearing Thursday by the Los Angeles Board of Harbor Commissioners, which postponed a decision on a construction permit for the system after Mayor Eric Garcetti offered to mediate the dispute.

The mayor called for a 28-delay in a decision on the permit, the Los Angeles Times reported.

"The decision before the board may have far-reaching impacts on the pace of automation at our port and could define how the port will compete and sustain jobs into the foreseeable future," Garcetti wrote in a letter presented at the hearing.

The mayor added that negotiations "should serve as the basis of a new task force to explore automation and its impacts on the future of the Port of Los Angeles and others across the state."

One terminal in Los Angeles and another in the adjacent Port of Long Beach already use driverless vehicles known as utility tractor rigs.

The uproar comes as a facility operated for Denmark's Moller-Maersk by APM Terminals plans to use the battery-powered, self-guided cargo handling equipment, which APM contends is a response to the ports' clean air rules.

Union members, however, fear the equipment will spread to all terminals and hundreds of jobs will be lost. They contend APM could use manned electric vehicles.

Automation of the ports dates back decades to the introduction of containers, which dockworkers agreed to in exchange for increased pay and benefits, the Times said. A 2008 International Longshore and Warehouse Union contract allowed West Coast ports to continue automating, and the pact was renewed in 2015.

Maersk attorney Peter Jabbour told the commissioners there is no legal basis for the union's opposition.

Eugene Seroka, the port's executive director, said the permit complies with the port's master plan and the California Coastal Act.

Janice Hahn, a member of the Los Angeles County Board of Supervisors, urged the board to block the automation plan, and Los Angeles Councilman Joe Buscaino noted that the City Council has the power to overturn any commission decision.