Alex Zanardi slid into his BMW for a second stint around Daytona International Speedway and reached for his steering wheel as it was passed to him through the window.

For one anxious moment, everyone waited to see if the wheel connected. When it snapped into place and Zanardi saw it was powered and linked into his engine, he gave a thumbs-up to his crew and pulled away.

Zanardi's fortune had turned and he was off in pursuit of closing the gap on the competition created seven hours earlier when the steering wheel malfunctioned. Full of nervous energy when he finally got to race in the Rolex 24 at Daytona, Zanardi's first stint was spoiled by an electrical problem between his car and the steering wheel that allows him to compete without the use of his prosthetic legs.

"My steering wheel was dead, not connected to the car," Zanardi said. "I was ready to jump out of the car and it would have been the shortest stint of my life."

It would also have been a heartbreaking end to Zanardi's magical first race in North America since he lost both his legs in a 2001 crash during a CART race in Germany. He's been the star attraction at an event that is stuffed with exotic cars, an infield festival and the top sports car drivers in the world.

That steering wheel is the centerpiece of his race at Daytona and just when Zanardi thought it had failed and he needed to get out of the car, it powered up and he drove away.

Zanardi's legs were severed above his knees in the 2001 crash and the two-time CART champion has raced in touring cars in the 17 years since, but always with his prosthetics. This trip to Daytona has been a journey with longtime partner BMW, which developed technology that gave Zanardi another global stage to inspire through his positive attitude and multitude of accomplishments.

Fernando Alonso was the star of the Rolex a year ago, but the two-time Formula One champion has been secondary during Zanardi's time at Daytona. The two were on track together during their first stints in the car, when Alonso passed Helio Castroneves to take the overall lead, and the shared track time gave Alonso a treasured experience.

"When Alex is in any race, he's the man to follow. Huge respect," Alonso said. "Every moment you spend with Alex on the track is gold."

After losing his legs, Zanardi took up hand cycling and has won four gold medals — six total medals — over two Paralympic games. He plans to resume training after Daytona in a bid to defend his medals in Tokyo next year, but all his energy has been with BMW and this project with Bobby Rahal's team.

Zanardi was already in overdrive when he finally got his chance to race 90 minutes into the event.

"It felt like the very first race of my life. There was no time for enjoyment and saying how lucky I am," Zanardi said.

Instead, it was a frantic diagnosis to determine what was going on with his steering wheel. Zanardi first manually tried another switch in the dash box, then engineers told him to take the whole thing off.

"I did that several times, it wasn't working. Spare was not working, either," he said. "Then magically everything was OK. I took off."

More impressive, Zanardi was able to make up the lap he lost while dealing with the wheel during his double stint that lasted roughly 90 minutes.

Team RLL and BMW had worked tirelessly on the driver change aspect of the program because it requires precise choreography to get Zanardi in and out of the cockpit. He hops off the pit wall onto the concrete, uses his arms to hoist himself into the car, then sets up the steering wheel after it is handed through the window.

The process initially took 30 seconds but the team had it down to less than 15 seconds by race day. So the steering wheel issue was a setback the team never predicted.

"I feel devastated, personally," Zanardi said. "I know how hard the engineers worked in Munich and in the United States, very meticulously. They were getting ready for every possible situation. Simulating problems — we did it dozens of times and never had problem. Never once."

The shot at victory seemed over because of the steering wheel. When Zanardi finished his stint and turned the car over to Jesse Krohn, the regular steering wheel sparked an electrical issue that caused the BMW to stall at the end of pit road. Krohn briefly got it rolling but it stalled again to bring out a full course yellow and force Krohn to the garage.

RLL got the car back on track down six laps and Zanardi was unsure if he'd get a chance to drive again. But after RLL fixed the electrical issue, he got the car back roughly nine hours into the race and pulled away without any problems. The team was down four laps as Zanardi went to work trying to put his BMW back into contention. 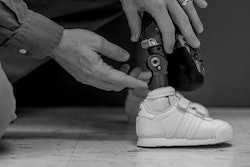