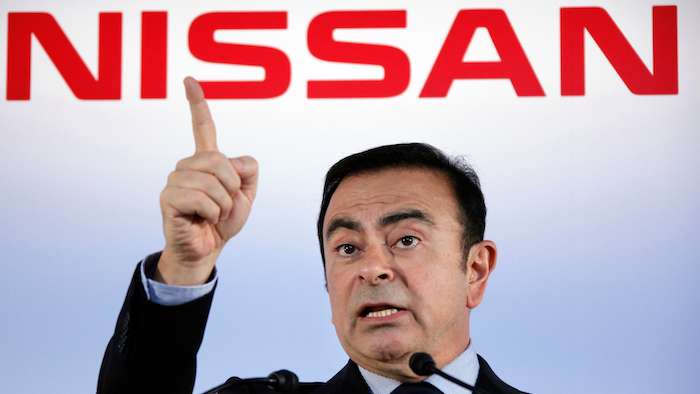 In this May 11, 2012, file photo, then Nissan Motor Co. President and CEO Carlos Ghosn speaks during a press conference in Yokohama.
AP Photo/Koji Sasahara, File

The appeal by the lawyers of Carlos Ghosn, Nissan's former chairman, against his prolonged detention since his arrest Nov. 19 was rejected Wednesday by the Tokyo District Court.

Ghosn's lawyers filed the appeal a day earlier. Ghosn's detention on suspicion of breach of trust had been approved through Friday. It is unclear what the prosecutors might do next. They can tag on additional allegations and "rearrest" a suspect or might decide to file formal charges on the breach of trust allegations.

The lawyers and Ghosn argued in court Tuesday against the detention. In his first public appearance since his arrest, Ghosn vigorously asserted his innocence and defended himself against each allegation.

The judge rejected the arguments, reiterating concerns Ghosn might flee Japan or tamper with evidence.

Denial of bail for months is common in Japan's criminal system and is often criticized as "hostage justice."

Legal experts say that, once suspects are charged, they can be held until their trials start so that evidence and witnesses can be decided upon and registered with a court, while they are still detained.

Ghosn, who led Nissan Moror Co. for two decades, is charged with falsifying financial reports in underreporting his income by about 5 billion yen ($44 million) over five years through 2015.

No trial date has been set. Trial preparation can take months.

The breach of trust allegations center around having Nissan shoulder Ghosn's personal investment losses in foreign exchange transactions, and payments of money from Nissan to a Saudi businessman.

Ghosn and his lawyers say there was a prior agreement Nissan would not suffer any losses on the collateral deal, and legitimate payments went to the businessman for his services to help with Nissan's dealer problems and investments in the Gulf.

Ghosn has been held at the Tokyo Detention Center, although he has been transferred to a bigger room with a bed.

Until his sudden downfall, Ghosn was a respected figure in the global auto industry. He was credited with rescuing Nissan from near-bankruptcy, reviving the Japanese automaker, allied with Renault SA of France, into one of the world's most successful auto groups.