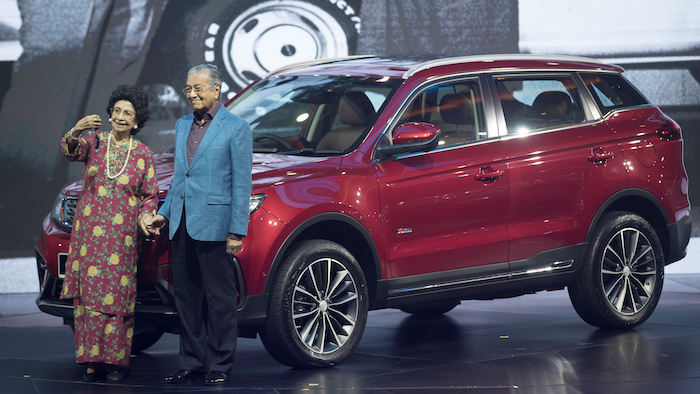 Malaysian national car maker Proton launched its first SUV on Wednesday in a fresh effort to transform its stale brand and turn around its fortunes, more than a year after China's Geely Holding Group Co. Ltd. bought a key stake in the company.

Proton, founded in 1983 as part of Malaysia's industrialization push, was once king of the country's roads but its sales suffered because of growing competition and a reputation for poor quality and bland models. Proton was privatized in 2012 and its new owner, conglomerate DRB-Hicom Berhad, sold a 49.9 percent stake to Geely in June last year after it failed to revive the carmaker. DRB-Hicom retains 50.1 percent equity in loss-making Proton.

Geely, which also owns Sweden's Volvo Cars, last year said it will inject $40 million into Proton as part of its stake purchase. Proton has a distribution network in some key markets in the region and the deal gives the Chinese company a platform to expand in Southeast Asia, where non-Japanese brands often struggle.

Proton said in a statement that the X70, its first vehicle jointly developed with Geely, will help transform perceptions of its brand. It said bookings for the car opened in September ahead of the launch and that it has received more than 10,000 orders.

The X70 "introduces Proton to a new market segment and is the key catalyst for the total rejuvenation of the brand," the company said.

Geely is one of China's biggest independent auto brands. Founded in 1986 as a refrigerator manufacturer, it started producing motorcycles in the 1990s and launched its first car in 2002. It bought Volvo from Ford Motor Co. in 2010.

Geely has said it will make Malaysia a manufacturing hub for right-hand drive vehicles for its global sales. Geely recently also agreed to help upgrade Proton cars for sale in global markets.

Proton's tie-up with Geely also marked a turning point in Malaysia's auto policy. The government has long resisted efforts to sell off any key stake in Proton, seen as a national icon.

Mahathir, who started Proton when he was prime minister for 22 years until his retirement in 2003, last year slammed the sale to Geely, saying it was like "losing a child." He returned to power a second time after leading an alliance to oust the country's long-ruling coalition in May elections.

At the launch Wednesday, Mahathir praised Proton's progress since its partnership with Geely. He said he was impressed with technological advances such as better security and voice command features in the X70. He urged Proton to continue to produce strong car models that can make Malaysia proud.

Mahathir recently said his government plans to start another national car company, but it drew criticism from many Malaysians who said authorities should instead focus on improving public transport.