Workers were given a jobs guarantee through 2028, but VW said it would work to reduce positions "in a socially responsible way" since electrics require fewer production steps. 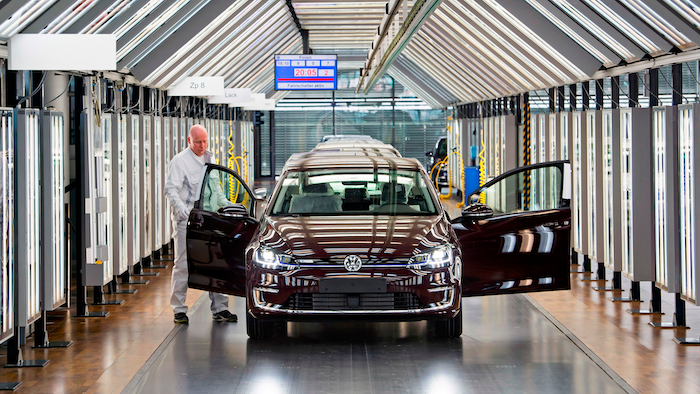 Wolfsburg-based Volkswagen said Wednesday that it would begin local production of electric-powered vehicles at its facilities in Emden and Hannover in 2022. A plant in Zwickau was designated previously for e-car production.

Volkswagen personnel head Gunnar Kilian said that workers were given a jobs guarantee through 2028, but that the company would work to reduce positions "in a socially responsible way" since electrics require fewer production steps.

Analysts say carmakers will need to add electric cars to their sales lineups to meet the new European Union rules on greenhouse gas emissions from 2021. Volkswagen and other car makers had bet heavily on diesel models, which get better mileage than gasoline powered vehicles, to meet tough limits on emissions of carbon dioxide, a greenhouse gas scientists say causes global warming. Diesel sales in Europe have eroded, however, since Volkswagen was caught using software to cheat on diesel emissions tests and paid more than 28 billion euros ($31 billion) in fines, settlements and penalties. Subsequent scrutiny of diesel technology showed that other carmakers' vehicle emitted more nitrogen oxide pollution in real-life driving than during tests. The EU introduced new test procedures Sept. 1 that are intended to measure emissions in daily driving conditions.

As diesel sales fall carmakers are turning to electric vehicles to meeting the new C02 limits, even though consumer uptake has been slow because of higher costs and lack of convenient places to charge up. Battery electric cars were 0.6 percent of EU auto sales last year.

Details of the plant allocations will be decided by the Volkswagen board of directors at a meeting on Friday.