People still pick, load and deliver food, but it might not be long before that changes. 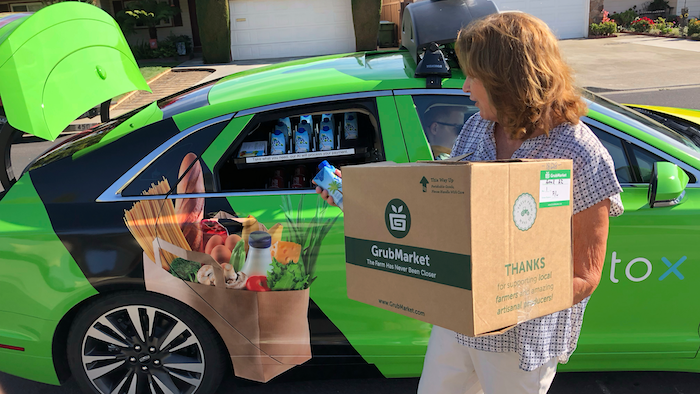 In this Aug. 29, 2018 photo, customer Maureen Blaskovich grabs a coconut water from the backseat window of a self-driving car in San Jose, Calif.
AP Photo/Ryan Nakashima

A self-driving car that delivers your groceries seems like a great idea: a robot vehicle that uses artificial intelligence to replicate the service of yesteryear's milkman and grocery store delivery kid.

There are companies now working on the technology to make it a reality. But they still haven't managed to get the robots to do all the work.

There's a human schlepping your food every step of the way. There's even one behind the wheel.

Tests of the technology in places like Scottsdale, Arizona, and San Jose, California, still feature human safety drivers who have to take over if the robotic one gets confused. So from picking and packing the groceries, to loading them in the car, to having the shopper come to the curb to unload them, people are still involved at every turn.

San Jose-based AutoX launched a pilot service in late August that uses proprietary vision technology to minimize the use of expensive lidar sensors. Those are the rotating sensors that shoot out lasers to see the world around it. Instead, AutoX relies mainly on cameras and stitches together 3-D maps, says chief operating officer Jewel Zhou Li.

"Drivers are expensive," Li said. "Only with self-driving cars can we make the on-demand economy work."

AutoX, a startup with nearly 100 employees, has partnered with GrubMarket, a 3-year-old company that uses humans to deliver groceries, normally for a fee of $6 for orders below $40.

It sources produce from local farms in the San Francisco Bay Area, and requires shoppers to choose their items online in the morning or the day prior to delivery.

Its workers sort the produce in a warehouse by hand. "We do all the picking, we do all the packing," said GrubMarket's marketing vice president, Dan Rabens. The partnership will create extra business, potentially without extra costs since delivery will be handled by AutoX.

In Scottsdale, startup Nuro is working with grocery giant Kroger on a test that will eventually use its special purpose vehicle, the R1. It's about half the width of a sedan and doesn't have room for people. And with a top speed of 25 miles per hour, the electric vehicle, which fits about 12 shopping bags, already has approval to drive on Arizona streets, the company said.

But until internal testing is complete, Nuro is relying on Toyota Priuses outfitted with self-driving technology, which also requires that a human be behind the wheel. Nuro charges a $5.95 flat fee per delivery, and started delivering groceries to customers in the 85257 ZIP code around partner Fry's Food, a Kroger subsidiary, in mid-August.

One benefit of building its own vehicle with no one inside is that it can be safer on roads, the company said.

"Because it has no passengers, R1 is designed to self-sacrifice — keeping what's on the outside safer even than what's inside," a Nuro spokesperson said in a statement.

The Google autonomous vehicle project called Waymo started a similar pilot program in July at Walmart stores in Phoenix. In that case, self-driving vehicles transport customers to and from their selected Walmart location to pick up online grocery orders.

For shopper Maureen Blaskovich, a 64-year-old retiree in San Jose, ordering from AutoX and GrubMarket scratched an itch of curiosity. She had seen the green vehicles on mapping routes pass by her home several times in recent days and finally stopped one to ask what they were doing.

After unloading some chicken wings and brightly colored carrots from an AutoX delivery vehicle's trunk on a recent weekday, Blaskovich said she liked the convenience of avoiding parking lot jams. And she liked GrubMarket's selection of unusual local items.

"It's like the old days when you get the milkman and the bread man to come by the house," she said.