The Sylphy Zero Emission, based on Nissan's Leaf, is being produced by Nissan Motor Co. and a Chinese partner, Dongfeng Motor group. 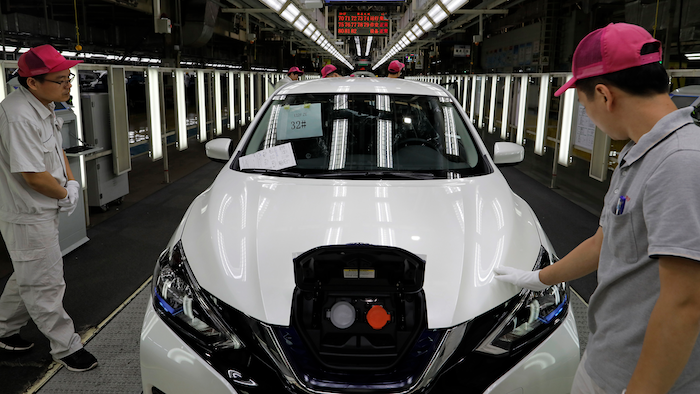 Nissan's first electric sedan designed for China began production Monday at the start of a wave of dozens of planned lower-cost electrics being created by global automakers for their biggest market.

Manufacturers including General Motors and Volkswagen are poised this year to launch a flood of electric sedans, minivans and SUVs designed for Chinese tastes and budgets. Nissan, Tesla, GM and others sell imports or electrified versions of models made by Chinese partners, but the market is dominated by low-cost local rivals including BYD Auto.

China's government sees electric cars as a promising industry and a way to clean up its smog-choked cities. Government subsidies have built China into the biggest market for electrics, but Beijing is shifting the burden to automakers with sales quotas and tougher fuel efficiency standards.

The Sylphy Zero Emission, based on Nissan's Leaf, is being produced by Nissan Motor Co. and a Chinese partner, Dongfeng Motor group.

The Sylphy costs 166,000 yuan ($25,850) after government subsidies, or just over half the sticker price of the Chinese version of the Leaf sold by Nissan and Dongfeng's joint venture Venucia brand. Nissan says the Sylphy can go 338 kilometers (210 miles) on a charge.

"We're confident that the Sylphy Zero Emission rolling off the production line today will become a main player in the EV market," said Nissan CEO Hiroto Saikawa. "We're going to roll out a range of EVs that will appeal to customers within all market segments."

Sales quotas that take effect next year require every brand to sell electrics or buy credits from competitors that do. That puts pressure on automakers to create affordable models Chinese consumers want.

China accounted for half of global electric car sales last year, but almost all were Chinese models that start as low as 140,000 yuan ($22,000). BYD Auto, the biggest global brand by number sold, said its first-half 2018 sales doubled from a year earlier to 71,000.

"Basically, all these international giants are testing the water. They have not really launched their heavyweight models in China yet," said industry analyst Yale Zhang of Automotive Foresight.

"By the end of this year, things will be different," Zhang said. "We really will see the market become more competitive and consumers will have more to choose."

Despite official support, electrics still are a fraction of Chinese passenger vehicle sales, which totaled 11.8 million in the first half of 2019, up 4.6 percent from a year earlier.

Nissan and Dongfeng announced plans in February to develop 20 electric models as part of a $10 billion, five-year investment program. They said that would include three models this year and three "affordable EV" compacts in 2019.

GM says it will roll out 10 electric and hybrid models in China from 2016 to 2020. It says by 2025, all its Buick, Cadillac and Chevrolet models in China will offer hybrid or pure-electric versions.

Tesla says China is its second-largest market. But a high sticker price has limited sales by other foreign brands to a few hundred vehicles.

Beijing announced in April it would end restrictions on foreign ownership of electric vehicle manufacturers this year in an effort to promote development.

Producers had been reluctant to transfer manufacturing to China due to the requirement to share technology with Chinese partners that might become rivals.

Freed of that requirement, Tesla Inc. announced in July it would build its first factory outside the United States in Shanghai, becoming the first wholly foreign-owned automaker in China.

Other automakers are working through ventures with Chinese partners, hoping to take advantage of their experience in developing lower-cost vehicles.