Elon Musk sent a tweet announcing he had secured funding to buy all of Tesla's stock at $420 per share. 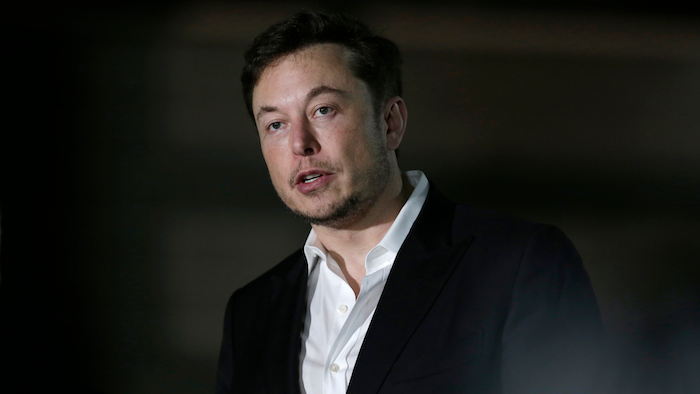 In this June 14, 2018, file photo Tesla CEO and founder of the Boring Company Elon Musk speaks at a news conference in Chicago.
AP Photo/Kiichiro Sato, File

Tesla CEO Elon Musk is gearing up to lead a buyout of the electric car maker in a stunning move that would end the maverick company's eight-year history trading on the stock market.

In his typically unorthodox fashion, the eccentric Musk dropped his bombshell on his Twitter account, which he has used as a platform for pranks, vitriol and now for a proposal to pull off one of the biggest buyouts in U.S. history.

Musk got the ball rolling Tuesday after the stock market had already been open more than three hours with a tweet announcing he had secured funding to buy all of Tesla's stock at $420 per share with no further details.

At that price, the buyout would cost nearly $72 billion, based on Tesla's outstanding stock as of July 27, but it's unlikely the deal would cost that much because Musk owns a roughly 20 percent stake in the Palo Alto, California, company. He also said he intends to give Tesla's existing shareholders the option of retaining a stake in the company through a special fund, if they want.

"Am considering taking Tesla private at $420. Funding secured," Musk wrote in his first tweet, following up with "good morning" and a smiley emoji. He later tweeted that the only uncertainty about completing the deal is whether he can gain shareholder approval.

The first tweet came hours after the Financial Times reported that Saudi Arabia's sovereign wealth fund had built a significant stake in Tesla Inc., but it was unclear if that was the funding Musk was referring to. The Financial Times, citing unnamed people with direct knowledge of the matter said Saudi Arabia's Public Investment Fund had built a stake of between 3 and 5 percent of Telsa's shares.

Musk's announcement was initially met with widespread skepticism, with many people connecting the proposed price to 420 being a common slang term for marijuana.

Musk also previously used his Twitter account to joke that Tesla was going bankrupt in an April Fool's Day tweet and his stability was called into question last month after he called a British diver who helped rescue children from a Thailand cave a pedophile. That baseless tweet was quickly deleted and Musk apologized to the diver.

The confusion caused by Musk's Tuesday announcement via Twitter also prompted regulators of the Nasdaq stock market to temporarily suspend trading in Tesla's stock. Although it's unusual for a CEO to make such a major announcement over social media, it does not appear to be improper.

"It's very unusual for any CEO other than Elon Musk. This is not how you do it and it makes you wonder how seriously to take it," said Erik Gordon, a business and law professor at the University of Michigan.

Musk probably wasn't violating any regulations by simply announcing that he was considering taking the company private, Gordon said, but his assertion that the funding already has been locked up could "expose him to at least potential legal risk" if it turns out that the financing is on shaky footing.

Musk later brought some clarity to the situation in an email to Tesla employees that was also posted on Tesla's blog. Trading in Tesla's stock resumed shortly after the letter's release, and the stock climbed 11 percent to close at $379.57. Musk's offer is 9 percent higher than Tesla's peak closing price of $385 reached nearly a year ago.

By taking Tesla private, Musk believes that the company will be able to sharpen its long-term focus of revolutionizing an automobile industry dominated by fuel-combustion vehicles without having to cater to investors' fixation on how the business is faring from one quarter to the next.

Making money has proven elusive for Tesla while it has been investing in electric car technology and ramping up production of its vehicles, including a sedan with a starting price of $35,000 to appeal to a broader audience.

The company has only posted a quarterly profit twice in its history and has never made money during an entire calendar year, something that Musk has been trying to change by cutting costs, including recent mass layoffs that trimmed Tesla's workforce by 9 percent. Tesla lost another $717.5 million in its most recent quarter.

Musk "has been running Tesla like a private company with publicly traded stock anyway so this deal makes some sense," Gartner analyst Mike Ramsey said.

Tesla completed an initial public offering of stock in 2010, largely because Wall Street provided a convenient vehicle to raise billions of dollars to finance its expansion. By going private, Tesla will lose that convenient source of financing, something that could cause massive headaches if the company continues to burn through cash as much as it has in recent years, Ramsey said.

Despite its challenges, Tesla has remained a favorite among many investors, partly because of their faith in Musk, who made his initial fortune as a co-founder of PayPal and also is the CEO of a trail-blazing aerospace company, SpaceX, that's already private.

But another substantial segment of investors are convinced Tesla is doomed to fail and are betting on the company's eventual demise by becoming "short sellers" of its stock. Short sellers borrow shares from other investors and then immediately sell them on the premise that they will be able to buy them back at a lower price later to replace they stock they borrowed.

Musk has long raged against short sellers and mentioned his desire to be rid of them as one of his reasons for taking Tesla private.

"Being public means that there are large numbers of people who have the incentive to attack the company," he wrote.

If Musk decides against going private, Gordon said his credibility could take another hit, though one he could weather.

"If he doesn't go forward with it, it will end up be another Elon Musk big mouth faux pas," Gordon said. "He will live to see another day. People will shake their heads and say, 'that's Elon.'"