The theoretical turbo-propeller aircraft would be used for regional air travel.

The engineers at Airbus have been particularly inspired by nature lately.

In late June, Airbus revealed a scale-model prototype of a new aircraft concept that flapped its wings. The AlbatrossOne uses free-flapping wing tips to fend off turbulence while reducing drag and wing weight.

The team at Airbus unveiled a new concept design at the Royal International Air Tattoo air show in the U.K. For this concept, the engineers took biomimicry a step further and went whole bird.

The Bird of Prey is a theoretical airliner: a hybrid-electric, turbo-propeller aircraft that could be used for regional air transportation.

As you can see, the wing and the tail mimic those found on falcons and eagles. Instead of a lone flapping tip, the wings have individually controlled feathers for active flight control, and the split tail doesn't have a tailfin, which would reduce drag and make the aircraft more efficient.

The concept also has a blended wing-to-fuselage joint that mirrors the arch found on birds of prey.

The concept could carry around 80 passengers -- regional craft average around 100 passengers -- and could have a range of approximately 932 miles. It would also be quieter and up to 50% more efficient, but when it's just a rendering, you can make some pretty bold claims.

While it is based on "realistic ideas," the Bird of Prey design is meant more to inspire future engineers and less about actual aircraft -- might be why they tossed an "Engineering is Great" decal on the concept.

Martin Aston, senior manager at Airbus, said "nature has some of the best lessons we can learn about design." Based on some of their recent work, the design team seems to be buying in wholeheartedly. 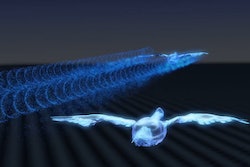