The passenger air vehicle is powered by an electric propulsion system and designed for fully autonomous flight for up to 50 miles.

Boeing released some footage of a test flight held near the company’s autonomous flight subsidiary, Aurora Flight Systems, in Manassas, Va. In the video, you see the experimental craft take off, hover and descend, but you don't see it land. What game are you playing Boeing, or was it just not smooth enough of a landing for prime time?

The effort is spearheaded by Boeing NeXt, which leads the company’s urban air mobility efforts and will oversee Aurora as it continues test‌ing to advance the safety and reliability of on-demand autonomous air travel.

The test assessed the vehicle's autonomous functions and ground control systems. Next, the team will test forward and wing-borne flight, as well as the transition phase between vertical and forward-flight modes — typically the most difficult engineering challenge for any high-speed VTOL aircraft.

The PAV is powered by an electric propulsion system and designed for fully autonomous flight for up to 50 miles. The aircraft is 30 feet long, 28 feet wide, and has an airframe that integrates the propulsion and wing systems to achieve efficient hover and forward flight.

In November 2017, Boeing completed its acquisition of Aurora Flight Sciences, which has some experience in innovative design work, such as the experimental LightningStrike VTOL, the Orion unmanned aircraft that can travel 3,000 miles in a single mission, and the SideArm, which is a giant arm used to launch UAVs.

What is impressive is that the team has gone from a conceptual design to a flying prototype in just one year. It was likely made more possible when that Boeing money train came crashing through the doors, but I’m only speculating. 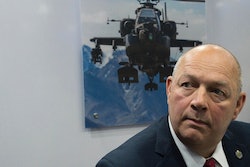