The exact location of the manufacturing facility has yet to be determined. 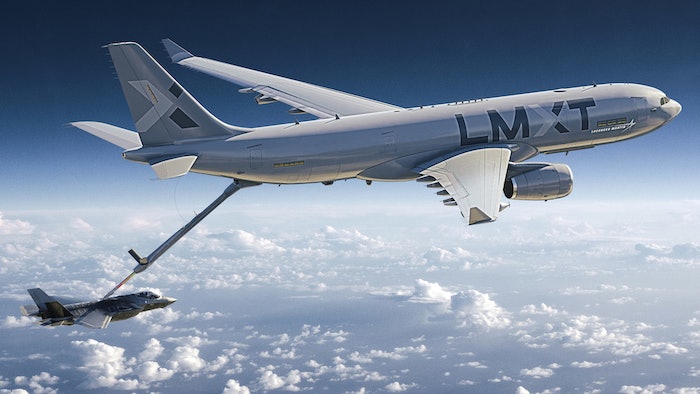 The LMXT is built on the design of the Airbus A330 Multi Role Tanker Transport.
Lockheed Martin

"Given the undisputed importance of the U.S. Air Force's strategic refueling mission, ensuring the LMXT is equipped with critical and relevant technologies for its refueling system is of paramount importance. Like the LMXT airframe, this refueling system is proven and low-risk, translating to known and added capabilities for the U.S. Air Force," said Lockheed Martin Chairman, President, and CEO James Taiclet. "With this commitment, Arkansas' manufacturing community has the opportunity to contribute to building America's next strategic tanker."

The LMXT is built on the design of the Airbus A330 Multi Role Tanker Transport (MRTT), which is the strategic tanking choice of 14 nations around the world. Offering several distinct U.S. Air Force-only capabilities designed to meet operator requirements, the LMXT offers advantages like an established fly-by-wire aerial refueling boom. Currently certified and used by allies to refuel U.S. Air Force aircraft in operations globally, the world's first fully automatic air-to-air refueling (A3R) system is a discrete asset.

"We are excited to continue expanding our U.S. footprint by partnering with the state of Arkansas to create the LMXT refueling boom production site and center of excellence. It is an honor to bring Airbus innovation to the state for this and future manufacturing opportunities," said C. Jeffrey Knittel, chairman and CEO of Airbus Americas. "The state-of-the-art boom system is a vital aspect of the overall LMXT offering, and we are proud to be working with Arkansans to build this best-in-class solution for the U.S. Air Force."

While the exact location of the manufacturing facility has yet to be determined, it will expand Airbus' footprint into "The Natural State." Manufacturing plays a significant role in the Arkansas economy, accounting for about 15% of the state's economic output. More than 12% of all Arkansas residents are employed by the manufacturing industry, according to the Arkansas Economic Development Commission.

"Lockheed Martin consistently sets the standard for aerospace and defense worldwide and significantly contributes to Arkansas' robust aerospace and defense industry," said Arkansas Gov. Asa Hutchinson. "Arkansas has the tools in place to help high-tech manufacturing succeed, and I'm pleased that Lockheed Martin and Airbus see themselves growing here in our state as they look to the future in the defense industry."

"I am thrilled Arkansas has been selected to manufacture the LMXT's boom, bringing well-paying jobs to our state and strengthening our economy. Most importantly, I'm proud Arkansas will continue to increase our contributions in support of America's men and women in uniform and our national defense," said U.S. Sen. John Boozman, who serves as the senior senator from Arkansas.

The LMXT aerial refueling system work is the first manufacturing opportunity for Airbus in Arkansas, but builds on an extensive manufacturing presence across the southeastern United States. Airbus builds the A320 and A220 airliners in Alabama, H125 and UH-72 Lakota helicopters in Mississippi, and satellites in Florida. The workforce across these facilities is more than 30% U.S. military veterans.

"Flights of freedom will be sustained by equipment made right here in Arkansas! This announcement further strengthens the Third District's role in our nation's defense, and our community's strong workforce and infrastructure are ready to support the manufacturing of the state-of-the-art LMXT system," said U.S. Rep. Steve Womack, who represents Arkansas' 3rd Congressional District. "Arkansans are proud knowing the leading role they'll have in building the next generation of the Air Force's capabilities. I look forward to a fair and open competition that I'm sure the LMXT will win."

This announcement follows Lockheed Martin's and Airbus' recently publicized plan to expand their footprints in Georgia and Alabama to support future LMXT assembly and configuration. The  LMXT will be built in two phases:

Integration of the Arkansas-built boom will be included in Phase 2 of the assembly and configuration process.

The LMXT complements the U.S. Air Force's tanker capabilities by providing the most advanced aerial refueler to meet America's immediate and long-term mission requirements. The LMXT strengthens and expands the U.S. aerospace industrial base by working with existing and new American suppliers.

"Arkansans are proud of the men and women who fight for our freedoms and the civilian workers who support them," Arkansas Secretary of Commerce Mike Preston said. "The LMXT tanker will be built in America, by Americans, for Americans — a mission that Arkansas encourages all manufacturers to embrace as we seek to bring quality jobs back to the U.S.A. and increase economic opportunities for American workers and American communities."

The LMXT offers a proven airframe with distinct U.S. Air Force-only capabilities designed to meet operator requirements, with advantages that also include: