Supplies Launched to China's New Space Station for Next Crew

China intends to finish building the station this year. 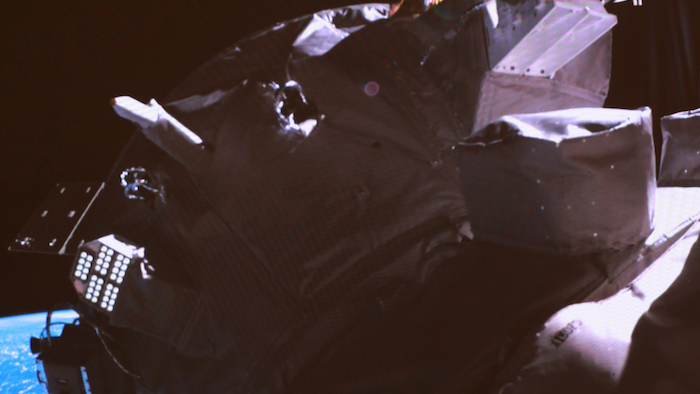 In this photo released by China's Xinhua News Agency, a Tianzhou-4 spacecraft docks with China's under-construction space station, as seen on a video screen at the Beijing Aerospace Control Center in Beijing, Tuesday, May 10, 2022. A Chinese cargo vessel docked with the country's under-construction space station Tuesday ahead of a new three-person crew expected to arrive next month.
Guo Zhongzheng/Xinhua via AP

BEIJING (AP) — A Chinese cargo vessel docked with the country’s under-construction space station Tuesday ahead of a new three-person crew expected to arrive next month.

The Tianzhou-4 spacecraft was slung into space atop a Long March-7 Y5 rocket at 1:56 a.m. from the Wenchang Launch Base in the southern island province of Hainan. State media said it docked with the station about seven hours later.

The cargo vessel is carrying supplies for the next crew's six-month stay, along with research equipment and spare parts for maintaining the station.

China intends to finish building the station this year with the addition of two laboratory modules in July and October to link with the Tianhe living module that was launched in April 2021. Another cargo craft, the Tianzhou-3, remains docked with the station.

China’s space program launched its first astronaut into orbit in 2003, making China only the third country to do so using its own resources after the former Soviet Union and the U.S.

It has landed robot rovers on the moon and placed one on Mars last year. China has also returned samples from the moon, and officials have discussed a possible crewed mission to the moon.

The government announced in 2020 that China’s first reusable spacecraft had landed following a test flight but no photos or details have been released.

China is excluded from the International Space Station due to U.S. unease that its space program is run by the ruling Communist Party’s military wing, the People’s Liberation Army.

The Shenzhou 14 crewed mission is scheduled to launch next month for a six month stay. Toward the end of that mission, three more astronauts will be launched aboard Shenzhou 15 for a further six months, with the two crews overlapping for three to five days, marking the first time the station has six people aboard.