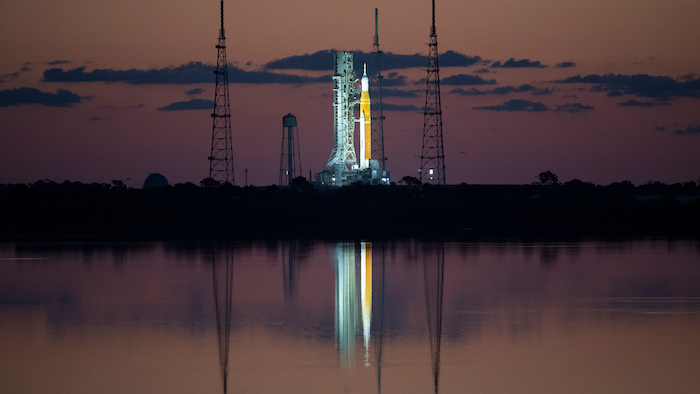 In this photo released by NASA, the Space Launch System (SLS) rocket with the Orion spacecraft aboard is seen at sunrise atop a mobile launcher at Launch Complex 39B at NASA's Kennedy Space Center in Cape Canaveral, Fla., Monday, April 4, 2022, in preparation for the Artemis I wet dress rehearsal test. Launch managers tried twice _ once Sunday and again Monday _ to load nearly 1 million gallons of fuel into the 322-foot (98-meter) rocket. Problems with fans at the launch pad thwarted the first effort, while a stuck valve halted the second attempt.
Joel Kowsky/NASA via AP

CAPE CANAVERAL, Fla. (AP) — NASA’s dress rehearsal for its mega moon rocket is off until at least this weekend because of a pair of technical problems that kept stalling a fueling test.

The countdown test is the last major milestone before the rocket's long-awaited launch debut. The Orion crew capsule atop the rocket will be hurled to the moon in a passenger-less test flight, looping around but not landing before returning to Earth. NASA is targeting June, depending on how the demo goes.

“We didn’t get through everything we wanted, but certainly learned a great deal that we’ll take into our next attempt,” said NASA's Jim Free, who's in charge of exploration systems development.

Speaking Tuesday at the Space Foundation's annual conference in Colorado Springs, Free said the launch team will wait until SpaceX launches four private passengers to the International Space Station before taking another crack at the fueling test. Liftoff is scheduled for Friday from Kennedy Space Center, barely a mile from the pad holding the SLS rocket.

Managers declined to specify a date for the next SLS fueling attempt, but noted they would not have to start the test from scratch.

The dress rehearsal began Friday and should have lasted just two days. A severe thunderstorm resulted in four lightning strikes at the pad Saturday, but officials did not believe that caused any of the technical problems. They described the problems as nuisances — not design issues.

“The rocket is fine. The spacecraft (capsule) is fine. We've just got to get through the test and the test objectives," mission manager Mike Sarafin told reporters.

After this first moonshot in NASA's Artemis program, NASA will send a crew around the moon in 2024 and then attempt the first lunar landing by astronauts in 2025 or so. Astronauts last walked on the moon in 1972 during NASA's Apollo program.