He alleges that he was forced to resign after raising concerns about financial malfeasance that cost taxpayers millions. 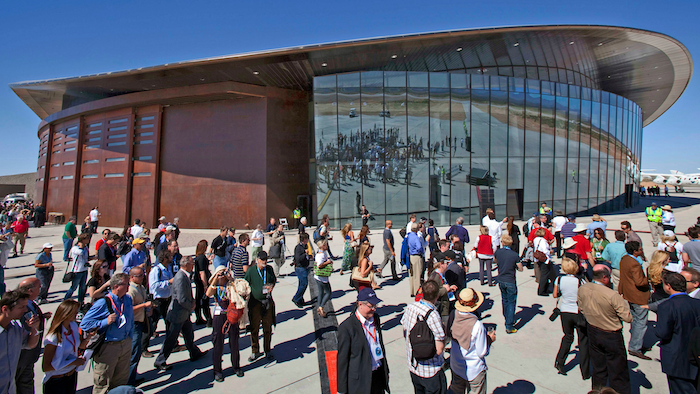 ALBUQUERQUE, N.M. (AP) — The former chief financial officer for the New Mexico Spaceport Authority filed a whistleblower lawsuit alleging that he was forced to resign after raising concerns about financial malfeasance that he said cost taxpayers millions of dollars.

He also said secret meetings held between state officials and Spaceport America’s most notable tenant — Virgin Galactic — may have resulted in violations of the state's anti-donation law, which restricts government donations to personal and private-sector enterprises as a precaution against graft and corruption.

Nora Meyers Sackett, the governor's spokeswoman, said her office will not comment on pending litigation. Other officials did not immediately respond Wednesday to messages seeking comment about the allegations.

DeGregorio, a certified public accountant who had worked for the spaceport authority for more than four years, posted a video statement about his lawsuit on social media. He said he wanted to set the record straight.

“I believe one person can make a difference in this world and I believe it's important to stand up for what is right,” he said.

The lawsuit also details alleged procurement violations and retaliation that DeGregorio faced after first reporting his concerns to officials in 2020. DeGregorio asked for a jury trial for the lawsuit, which seeks back pay, lost future earnings and other financial damages, including punitive damages.

DeGregorio's initial complaints triggered a 2020 investigation into allegations of financial mismanagement, ethical violations and abuse of power by former spaceport director Dan Hicks, who was fired in 2021. Hicks has never commented publicly about the claims.

New Mexico Attorney General Hector Balderas' office said Wednesday that prosecutors have reviewed the financial oversight concerns raised during Hicks' tenure and directed the Spaceport Authority to strengthen its governance and oversight structures to ensure the appropriate use of taxpayer dollars.

"However, no conclusion has been reached on any related criminal matter at this time and we are still evaluating the new allegations contained in the complaint and will respond accordingly,” the office said in an emailed statement to The Associated Press.

DeGregorio also listed Balderas and State Auditor Brian Colón as officials who were part of what he described as a cover-up involving problems at the spaceport. Colón noted that only the state of New Mexico was named as a party in the civil complaint.

DeGregorio said the 2020 investigative report prepared for the state auditor’s office was flawed.

That report alleged DeGregorio assisted Hicks in circumventing procurement policies and evading internal controls. However, DeGregorio in his complaint stated that Hicks had repeatedly tried to get him to skirt the rules and that other spaceport employees were too scared to speak up.

DeGregorio alleged that the procurement violations continued after he resigned.

DeGregorio in the lawsuit accused Keyes — who also was appointed by Lujan Grisham as chair of the spaceport authority board — of ordering him to alter a report that projected the spaceport’s economic impact at almost $1 billion between 2016 and 2025. He said he refused and reported the matter to the governor's office.

Sierra and Doña Ana counties both enacted local taxes to help repay bonds that funded construction of Spaceport America, a desert outpost just north of Las Cruces that is designed to support a range of aerospace businesses — from commercial tourism ventures like those planned by Virgin Galactic to vertical rocket launches.

He said rather than refinancing in the public market, the bonds were refinanced at higher interest rates and under poor loan terms that included a requirement for a large reserve fund.

DeGregorio alleges that Keyes was attempting to perform a sole source refinance directly with the New Mexico Finance Authority rather than putting the refinancing out to bid. If the bonds would have been refinanced in the public markets, he claimed that the Finance Authority would be required to give back millions of dollars in reserve funds and would not receive any future spaceport tax revenues.

According to the lawsuit, the Finance Authority collected the tax revenue from the two counties and repackaged it into low interest loans to provide to other projects in other locations around New Mexico.