All four people aboard were killed. 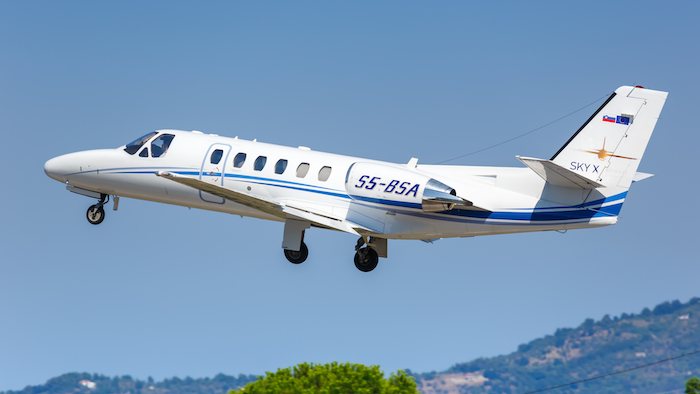 A small jet crashed shortly after taking off from a small airport in Connecticut on Thursday morning, killing all four people aboard, officials said.

The jet took off just before 10 a.m. from the Robertson Airport before crashing into the building at Trumpf Inc., a manufacturing company, Farmington Police Lt. Tim McKenzie said.

“It appears there was some type of mechanical failure during the takeoff sequence that resulted in the crash behind us,” he said.

The crash set off chemical fires inside the Trumpf building, Gov. Ned Lamont said. Everybody who was in the building has been accounted for, with two employees suffering injuries the company said were not serious, according to officials.

Authorities are trying to identify the dead on the plane, parts of which protruded from the building or were scattered on the lawn outside, Lamont said.

“It was just a ball of fire, an explosion, and then the chemical fires afterwards," he said.

“I think they are still trying to identify who was there, identify the next of kin before we can say anything else," he said. "I just know it was incredible. The thing was filled with jet fuel."

Farmington is in central Connecticut, about 10 miles (16 kilometers) southwest of the state capital of Hartford.

McKenzie said an intense fire burned for over 20 minutes.

Caleb Vaichaus, who works near the crash site, said he ran to the scene after hearing a loud explosion and seeing billows of black smoke from the Trumpf building.

“I ran straight toward it to see if I could help. I got as close as I possibly could and the flames were extremely hot and the fire was just getting bigger," he told WTIC-TV.

Aerospace and mining engineers are mapping out plans for harvesting the moon.
Sep 9th, 2021

Scientists used more than 2 million satellite images from across the globe.
Sep 9th, 2021

The incident occurred as the station's batteries were being recharged.
Sep 9th, 2021
Follow Us
Most Recent