An automatic engine abort occurred with just 1.3 seconds remaining in the countdown. 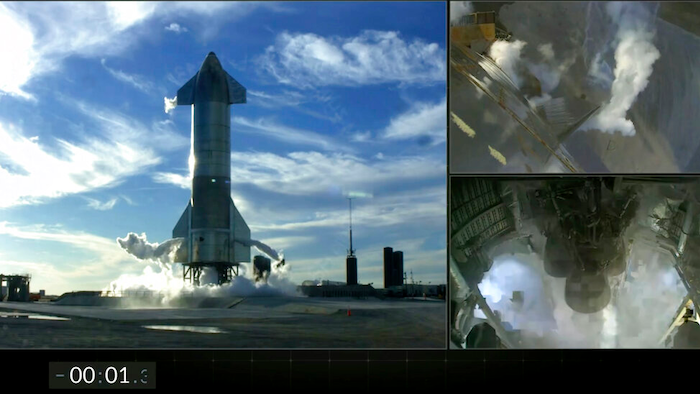 Frame grab from video shows the Starship just after an automatic engine abort in southeast Texas, Dec. 8, 2020.
SpaceX via AP

CAPE CANAVERAL, Fla. (AP) — The first high-altitude test flight of SpaceX’s futuristic Starship was aborted at the last second in Texas on Tuesday.

SpaceX came close to launching a prototype of the rocketship that company chief Elon Musk is designing to carry people to Mars. The goal was to shoot Starship to an altitude of eight miles (12.5 kilometers) — the highest yet — and then bring it back to a vertical landing.

But an automatic engine abort occurred with just 1.3 seconds remaining in the countdown. SpaceX announced on its web broadcast it was done for the day, and there was no word on when it might try again.

SpaceX already has conducted five Starship test flights, but these earlier, simpler models have gone no higher than 490 feet (150 meters.) The stainless steel version on the launch pad Tuesday was the first to feature a nose cone, body flaps and three Raptor engines.

SpaceX has taken over Boca Chica in the far southeastern corner of Texas, near the Mexican border, to build and test its Starships. The company intends to use Starships — the upper stage atop Super Heavy boosters — to deliver massive satellites into orbit around Earth, and send people and cargo to the moon and Mars.