But Baltimore authorities conceded they do not have enough data yet to determine the program's effectiveness. 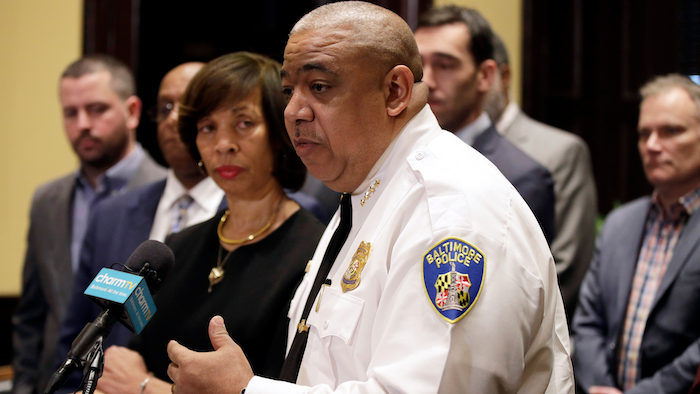 The Baltimore Police Department revealed Friday that an aerial surveillance system being tested across the city since May has given officers information in 81 criminal cases, including 19 homicides, but acknowledged it does not have enough data yet to determine the program's effectiveness.

Of the cases backed by aerial imagery, 21% have been closed with an arrest compared to 16% of similar incidents that were not captured by the wide-angle cameras mounted on airplanes sweeping Baltimore. The figures, which are provisional, are contained in a report covering the first half of the six-month pilot program.

“This report provides an extensive review of the program’s progress, while fulfilling our commitment to transparency in sharing data on where the program is at its halfway mark,” Baltimore Police Commissioner Michael Harrison said in a statement. “We will continue to be guided by our research partners on the effectiveness of the program.”

Throughout the test, the cameras are taking photos of at a rate of one per second as the airplanes fly above the city. The images can then be stitched together to create a continuous visual record to assist police investigate only homicides, nonfatal shootings, armed robberies and carjackings.

Police have said the resolution of the images is not sharp enough to identify a person’s face, ethnicity, gender and clothing or a vehicle’s color, make, model and license plate. Instead, people and vehicles appear on the imagery as dots, which can then be identified when the visual record is paired up with street-level cameras, license plate readers and gunfire sound detectors.

Ohio-based Persistent Surveillance Systems is operating the surveillance technology and analyzing the images for police. The project is being funded with about $3.7 million from the nonprofit of Texas billionaires Laura and John Arnold.

The report shows the city saw a combination of 778 homicides, shootings, armed robberies and carjackings between May 1 and July 31. Of those, 181 happened during flight hours and 96 of them were in flight coverage. Aerial images were analyzed for 81 of the cases, of which 17 — or 21% — were “provisionally closed” with an arrest.

The report also states that of the 697 cases for which aerial surveillance was not analyzed, 113 — or 16% — were “provisionally closed” with an arrest.

Through mid-August, the most time the aircraft flew above the city during a week was nearly 120 hours.

Third-party researchers, including RAND Corp., are evaluating whether the program leads to arrests and case closures, earns public support and ultimately has a deterrent effect.

The analysis was released a day after the department and the American Civil Liberties Union argued before a panel of federal appeals judges in an appeal from a district court decision denying a request from the organization to temporarily block the pilot program.

The ACLU, on behalf of a grassroots organization and area activists, sued the department and Harrison in April to stop the test from kicking off. The arguments at Thursday’s hearing centered on whether the program violates people’s reasonable expectation of privacy regarding movement, and results in indiscriminate searches without a warrant.

China Launches Mission to Bring Back Material from Moon

The plane could be flying European skies in a matter of weeks.
Nov 24th, 2020

The satellite’s extremely accurate radar altimeter will bounce energy off the sea surface as it sweeps over Earth’s oceans.
Nov 23rd, 2020

The mission's key task is to drill almost 7 feet beneath the moon's surface and scoop up materials.
Nov 23rd, 2020

Huge Radio Telescope to Close in Blow to Science

Officials said operating the massive telescope is too dangerous given the significant damage it recently sustained.
Nov 20th, 2020

Japanese astronaut Soichi Noguchi — only the third person to launch aboard all three — said the Dragon “really wanted to go to space.”
Nov 20th, 2020

The Pirs spacewalking module will be removed and junked to make room for the long-delayed Nauka research lab.
Nov 19th, 2020

When the final stage of the rocket ignited, the spacecraft tumbled off course.
Nov 18th, 2020

The Chang’e 5 mission plans to bring materials back from the moon for the first time in four decades.
Nov 17th, 2020

NASA hopes the launch will be the first of many crew rotations between the U.S. and International Space Station.
Nov 16th, 2020
Follow Us
Most Recent