The astronauts on SpaceX’s first crew flight said their capsule sounded like a beast as it descended through the atmosphere. 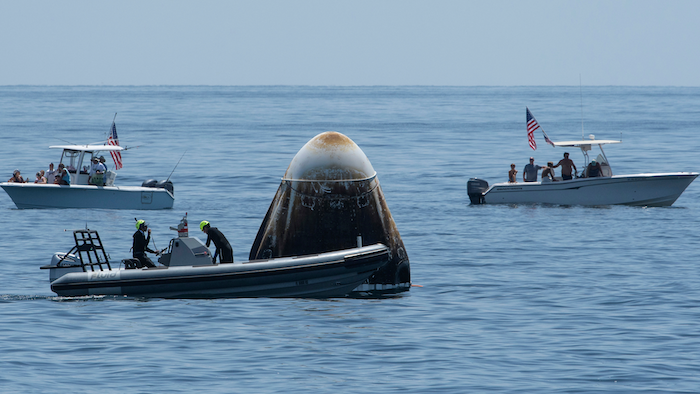 CAPE CANAVERAL, Fla. (AP) — The astronauts on SpaceX’s first crew flight said Tuesday that their Dragon capsule “came alive” and sounded like a beast as it descended through the atmosphere to a smooth splashdown in the Gulf of Mexico.

Two days after returning from the International Space Station, NASA’s Bob Behnken described in vivid detail their wild ride home. SpaceX had provided Behnken and Doug Hurley video and audio of previous splashdowns, so they wouldn't be startled during the test flight.

“Once we descended a little bit into the atmosphere, the Dragon really, it came alive,” Behnken said from NASA's Johnson Space Center in Houston.

The thrusters that keep the capsule on track were firing almost continuously, he said.

“It doesn't sound like a machine, it sounds like an animal coming through the atmosphere, with all the puffs that are happening from the thrusters and the atmospheric noise,” Behnken said.

When the trunk of the capsule fell away as planned and again when the parachutes jerked open, Behnken said it felt like “getting hit in the back of a chair with a baseball bat, just a crack.”

The astronauts encountered 4.2 Gs — or 4.2 times the force of Earth's gravity — as they descended.

Hurley said he's “almost kind of speechless” at how well the capsule performed and how well the two-month mission went.

SpaceX became the first private company to send astronauts into orbit with the May 30 liftoff from NASA's Kennedy Space Center, ending a nine-year launch drought from home soil for NASA astronauts. NASA had been relying solely on Russia to ferry astronauts to the space station since the retirement of the shuttles in 2011.

“One of the things that we're most proud of is bringing launch capability back to the Florida coast, back to America, and of course, landing safely at the end of all of that,” Behnken said.

It was the first splashdown for NASA astronauts in 45 years. Russian capsules launch from Kazakhstan and return there, too — on land.

The biggest surprise came right after Sunday afternoon's splashdown, when close to two dozen pleasure boats rushed toward the capsule, bobbing not quite 40 miles (64 kilometers) off the coast of Pensacola, Florida.

Two Coast Guard vessels stayed the required 10 miles (16 kilometers) away, but their requests for the public to stay away were ignored, putting themselves, the astronauts and the recovery team at risk, officials noted.

Hurley said the capsule's windows were scorched from reentry and so neither he nor Behnken could see “the other flotilla that was out there.”

“We certainly appreciate the folks wanting to participate in the event, but there are some safety aspects ... we'll have to take a look at because it just can't happen (again) like it did before," Hurley said.

The opening of the hatch was delayed because of traces of escaping rocket fuel fumes — toxic to breathe — around the capsule.

“Just a word to the wise for folks who have ideas of coming that close again in the future," Behnken said. "We take extreme precautions to make sure it is safe and we do that for a reason.”

As they waited for the hatch to open, the astronauts tested the on-board satellite phone, putting in a call to SpaceX’s control center, which promptly said “standby” and left them hanging. So then they called the NASA flight director as well as their wives in Houston. NASA requested the test after an astronaut whose Russian launch was aborted in 2018 ended up with incorrect or missing numbers on the crew’s sat phone, according to Hurley.

Behnken said it’s his turn now to support his wife, NASA astronaut Megan McArthur, who will fly on the same Dragon next spring once it’s refurbished.

They had promised their 6-year-old son, Theo, a dog once this test flight ended. The puppy will be arriving in about two weeks, he said, once Theo understands how much work is required.

“Otherwise, it will be my dog instead of his.”