The program has been attended by nearly 1 million people, including a dozen who went on to become astronauts or cosmonauts. 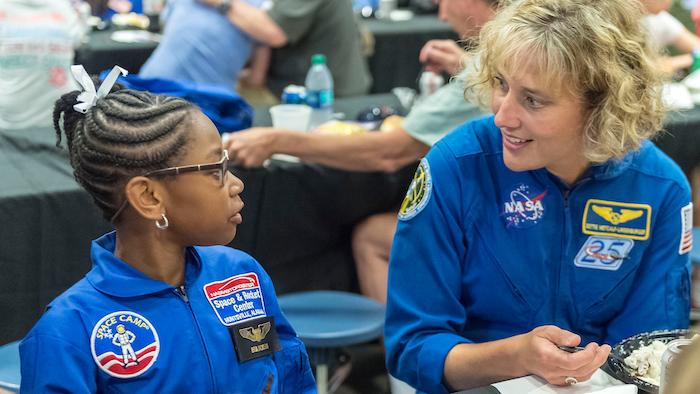 BIRMINGHAM, Ala. (AP) — Space Camp, an educational program attended by nearly 1 million people, including a dozen who went on to become astronauts or cosmonauts, said Tuesday it’s in danger of closing without a cash infusion because of the coronavirus pandemic.

Part of the state-owned U.S. Space and Rocket Center in Huntsville, Space Camp was shut down for weeks earlier this year and has been hampered by low attendance since reopening in June with limited capacity, officials said.

With most of its typical staff slashed and the normal flow of international students and school groups down to nothing for the fall because of the virus, leaders held a news conference announcing a “Save Space Camp” drive.

Officials hope to raise at least $1.5 million in donations they said were needed to keep the museum open through October, the end of the fiscal year, and to reopen Space Camp in April.

“We are now struggling for our very survival," said John Nerger, chair of a state board that oversees the center. Donors gave nearly $100,000 within a couple hours of the announcement.

Located near NASA's Marshall Space Flight Center, the museum features exhibits including an authentic Saturn V rocket, the Apollo 16 command module and a full-sized model of a space shuttle. Space Camp students have access to that area plus classes and mockups where they participate in simulated space missions.

Since opening in 1982, Space Camp has had almost 1 million youth and adult attendees, and it was the inspiration for a 1986 movie of the same name. Ten people selected as astronauts and two who went on to become cosmonauts attended the camp, promoters said.

“Space Camp is Huntsville’s most visible calling card," said Alabama Tourism Director Lee Sentell, who worked as marketing director for the attraction in its early days.

With government coffers lean because of decreased tax revenues, leaders hope corporations that are part of north Alabama's aerospace industry will donate to the fundraising drive. But Nerger said the center, which is self-sustaining and doesn't receive government money for operations, also is counting on private donations.

“We just cannot afford for someone wearing a cape to swoop in and rescue us," he said.