Flapping-Wing Drone Could Be Safer, Quieter than Quadcopters

The prototype mimics one of one of the world's fastest birds. 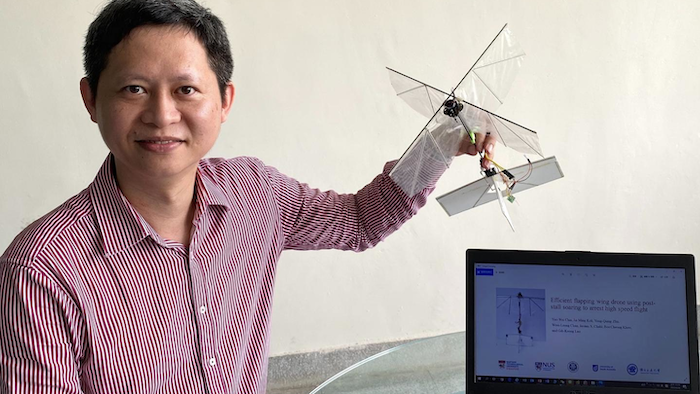 A drone prototype that mimics the aerobatic maneuvers of one of the world's fastest birds, the swift, is being developed by an international team of engineers in the latest example of biologically inspired flight.

A research team from Singapore, Australia, China and Taiwan has designed a 26 gram ornithopter (flapping wing aircraft) which can hover, dart, glide, brake and dive just like a swift, making them more versatile, safer and quieter than the existing quadcopter drones.

Weighing the equivalent of two tablespoons of flour, the flapping wing drone has been optimized to fly in cluttered environments near humans, with the ability to glide, hover at very low power, and stop quickly from fast speeds, avoiding collisions - all things that quadcopters can't do.

National University of Singapore research scientist, Dr. Yao-Wei Chin, who has led the project published today in Science Robotics, says the team has designed a flapping wing drone similar in size to a swift, or large moth, that can perform some aggressive bird flight maneuvers.

"Unlike common quadcopters that are quite intrusive and not very agile, biologically-inspired drones could be used very successfully in a range of environments," Dr. Chin says.

The surveillance applications are clear, but novel applications include pollination of indoor vertical farms without damaging dense vegetation, unlike the rotary-propelled quadcopters whose blades risk shredding crops.

Because of their stability in strong winds, the ornithopter drone could also be used to chase birds away from airports, reducing the risk of them getting sucked into jet engines.

"There are existing ornithopters that can fly forward and backward as well as circling and gliding, but until now, they haven't been able to hover or climb. We have overcome these issues with our prototype, achieving the same thrust generated by a propeller," Dr. Chahl says.

"The triple roles of flapping wings for propulsion, lift and drag enable us to replicate the flight patterns of aggressive birds by simple tail control. Essentially, the ornithopter drone is a combination of a paraglider, airplane and helicopter."

There are currently no commercialized ornithopters being used for surveillance, but this could change with the latest breakthrough, researchers claim.

By improving the design so ornithopters can now produce enough thrust to hover and to carry a camera and accompanying electronics, the flapping wing drone could be used for crowd and traffic monitoring, information gathering and surveying forests and wildlife.

"The light weight and the slow beating wings of the ornithopter poses less danger to the public than quadcopter drones in the event of a crash and given sufficient thrust and power banks it could be modified to carry different payloads depending on what is required," Dr. Chin says.

One area that requires more research is how birds will react to a mechanical flying object resembling them in size and shape. Small, domesticated birds are easily scared by drones but large flocks and much bigger birds have been known to attack ornithopters.

And while the bio-inspired breakthrough is impressive, we are a long way from replicating biological flight, Dr. Chin says.

"Although ornithopters are the closest to biological flight with their flapping wing propulsion, birds and insects have multiple sets of muscles which enable them to fly incredibly fast, fold their wings, twist, open feather slots and save energy.

"Their wing agility allows them to turn their body in mid-air while still flapping at different speeds and angles.

"Common swifts can cruise at a maximum speed of 31 meters a second, equivalent to 112 kilometers per hour or 90 miles per hour.

"At most, I would say we are replicating 10% of biological flight," he says.