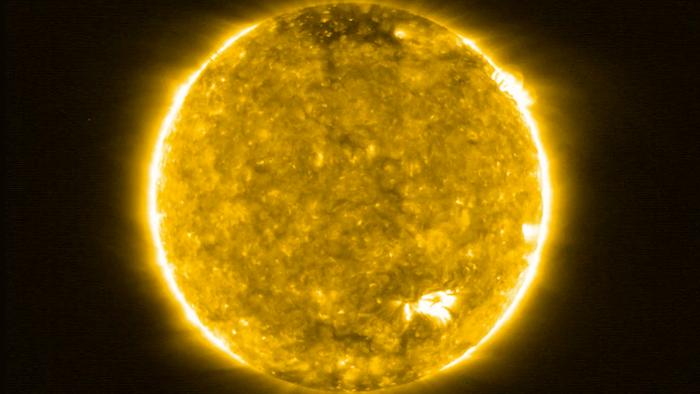 The orbiter was about 48 million miles (77 million kilometers) from the sun — about halfway between Earth and the sun — when it took the stunning high-resolution pictures last month.

NASA’s Parker Solar Probe is flying much closer to the sun than Solar Orbiter — too close for cameras to safely photograph the sun. Its lone camera faces away from the sun to observe the solar wind.

That’s why Solar Orbiter’s new pictures showing vibrant swirls of yellow and dark smoky gray — the first images from so close and at such small scale — are so precious. The team had to create a new vocabulary to name these tiny flare-ups, said European Space Agency project scientist Daniel Muller.

Muller described the observed multitude of “campfires” shooting into the corona, or sun's crown-like outer atmosphere, as quite possibly “the tiny cousins of the solar flares that we already know." Millions if not billions of times smaller, these tiny flares may be heating the corona, he said, long known to be hundreds of times hotter than the actual solar surface for unknown reasons.

The Royal Observatory of Belgium's David Berghmans, principal scientist of the instrument that captured the images, said he was blown away. He said his first response was: “This is not possible. It cannot be that good.”

“It was really much better than we expected, but what we dared to hope for,” Berghmans said.

These so-called campfires, Berghmans noted, are “literally everywhere we look.” Not yet well understood, they could be mini explosions, or nanoflares. More measurements are planned.

The $1.5 billion spacecraft will tilt its orbit as the mission goes on, providing unprecedented views of the sun's poles. This vantage point will allow it to capture the first pictures of the solar poles.

Solar Orbiter will get even closer to the sun in two years.

“This is just the beginning of the long epic journey of Solar Orbiter,” Muller said.

The pandemic has forced Solar Orbiter's scientists to work from home for months. Only a few engineers are allowed at any one time inside the control center in Darmstadt, Germany.