The new lithium-ion batteries should last the rest of the International Space Station's life. 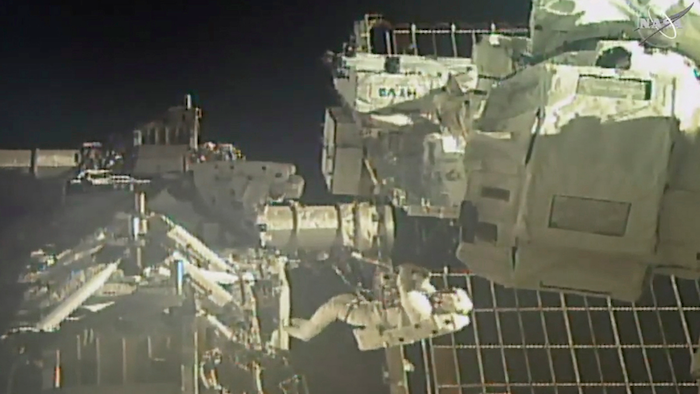 CAPE CANAVERAL, Fla. (AP) — Astronauts performed their second spacewalk in under a week Wednesday to replace old batteries outside the International Space Station.

Commander Chris Cassidy and Bob Behnken ventured out to tackle the big, boxy batteries. For every two outdated batteries coming out, a new and improved one goes in to supply power to the station on the night side of Earth.

NASA plans to send the astronauts out twice more in July to complete the battery swap-outs that began in 2017. The new lithium-ion batteries should last the rest of the space station’s life, according to officials.

Before floating out, Cassidy attached a spare mirror to his sleeve to replace one that came off and floated away during Friday’s spacewalk. Astronauts use the wrist mirrors to see the displays on their chest control panel.

NASA wants the battery work completed before Behnken returns to Earth in August aboard a SpaceX capsule. He's one of two test pilots who launched on SpaceX's first astronaut flight in May.

Cassidy and Behnken now have eight spacewalks apiece on their resumes.

A space tourist might get a chance to join the prestigious spacewalking ranks — for the right price.

Virginia-based Space Adventures Inc. is seeking a paying customer to not only fly to the space station, but do a spacewalk with an experienced cosmonaut. Before launching from Kazakhstan, the space tourist would need to undergo extra training in Star City, Russia.

Space Adventures is not divulging the cost of the two-week mission, spacewalk included. The flight would take up two tourists in 2023, one of whom would step outside. The Russian rocket company Energia has teamed up with Space Adventures for the expedition.

Plenty of specialized training would be needed before someone ventures out on a spacewalk, Behnken told The Associated Press earlier this week.

NASA considers spacewalks one of the riskiest parts of any mission, and astronauts spend hours practicing underwater — the closest simulation to spacewalking on Earth.

“I think it could be really challenging for a tourist to go on a spacewalk,” Behnken said. Any tourist would want multiple practice sessions in order to be "prepared for the space environment.”