The company's pilots weren’t authorized for its flight operations. 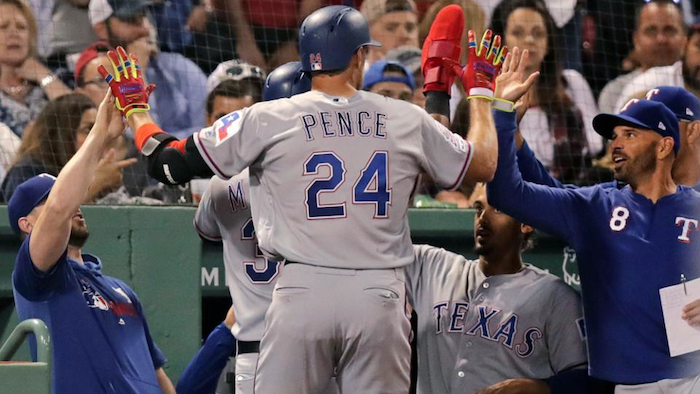 The Texas Rangers' Hunter Pence is congratulated after his inside the park home run against the Boston Red Sox at Fenway Park, June 11, 2019.
AP Photo/Charles Krupa

DALLAS (AP) — Federal officials have grounded a charter operator that carried professional baseball and hockey teams, saying the company and its pilots weren’t authorized for the kind of commercial venture they operated.

The FAA said Paradigm conducted at least 34 unauthorized flights between June 2013 and March 2018 for customers including the Texas Rangers, the Arizona Diamondbacks, the Cleveland Indians and the Oakland Athletics baseball teams, as well as the New York Rangers and the Toronto Maple Leafs hockey teams.

Paradigm did not immediately comment after being reached for response.

The FAA has different standards for private aircraft carriers and those who advertise or otherwise promote their services to the public. Private operators can generally work for one or a few selected customers, while the second group, so-called common carriers, face stricter regulations because they can solicit business.

The FAA said Dallas-based Paradigm Air's pilots had not finished training and flight-proficiency checks that are required for common-carriage flights. The company also lacked people in key jobs: It had no director of maintenance, no chief pilot and no chief inspector, the agency said.

The FAA said Paradigm paid a consultant to arrange long-term contracts with several teams and was paid by a charter broker for some of the flights. On at least 11 occasions, the FAA said, Paradigm claimed trips were demonstration flights for prospective aircraft buyers when the real purpose was to make money.