The report is due out before Tuesday's one-year anniversary of the crash. 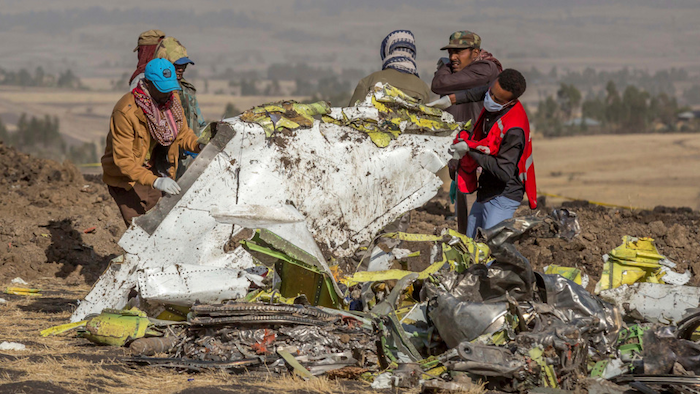 In this March 11, 2019, file photo, rescuers work at the scene of an Ethiopian Airlines flight crash near Bishoftu, Ethiopia.
AP Photo/Mulugeta Ayene, File

Ethiopian investigators are expected to release an interim report this week on the crash of a Boeing 737 Max 8 jet that killed 157 people. The report is due out before Tuesday's one-year anniversary of the crash. It was the second crash of a Max, and it caused aviation regulators to ground about 400 of the planes worldwide until the cause is determined and flight-control software is fixed. A final report is expected later this year.

There’s little doubt that Ethiopian investigators will find fault with the Max’s flight control software called MCAS, an acronym for Maneuvering Characteristics Augmentation System. It automatically lowers the plane’s nose to prevent an aerodynamic stall. Initially, pilots worldwide weren’t told about the system, which Boeing said was needed because the Max had bigger, more powerful engines that were placed farther forward on the wings than previous-generation 737s. Boeing’s big selling point for the plane was that it was essentially the same as older 737s and therefore little pilot training was needed to switch to the new aircraft.

A preliminary report released in April by the Ethiopian agency indicated that MCAS pushed the jet’s nose down based on faulty readings from sensors outside of the plane. The agency found that pilots were inundated by multiple alarms but, at least initially, followed procedures to deal with an MCAS problem. They cut off power to MCAS, but because they failed to slow the plane from takeoff speeds, they couldn’t take the next step — manually turn a wheel that would move a stabilizer on the tail to point the nose back up. One sensor measured the plane's speed at 575 miles per hour (925 kilometers per hour), which some experts believe put too much force on the stabilizer, making manual movement nearly impossible. The pilots apparently turned MCAS back on shortly before the final, fatal nosedive.

What we don't know

Exactly what the pilots talked about in the frantic moments after takeoff as they tried to deal with the MCAS intervention. Whether they followed checklists in dealing with the crisis, and how multiple alarms influenced their decisions. Also, why they didn’t slow the plane from takeoff speeds, which could have let them manually control the rear stabilizer.

A transcript of the cockpit voice recorder would help pilots across the globe train for similar problems when automated flight control software goes awry. It also will help to train pilots on how to handle the blizzard of alarms that go off when a plane starts having problems so they can diagnose the trouble and deal with the most critical things.