His position contradicts his own administration's proposed ban on the sale of GE-Safran engines to China. 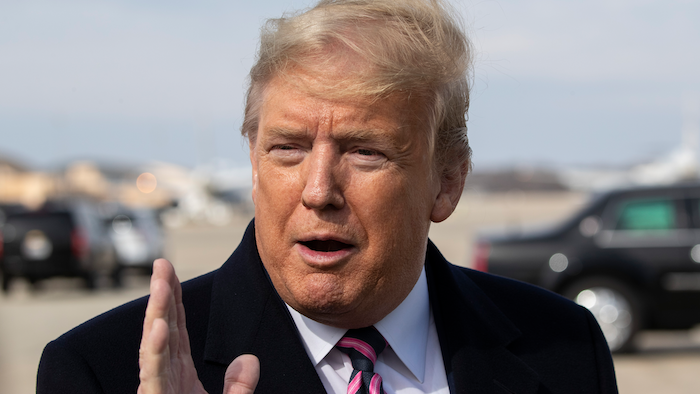 WASHINGTON (AP) — President Donald Trump signaled Tuesday via Twitter that he opposes efforts to block the sale of jet engines to China. Trump's tweets appeared intended to thwart a proposal from within his own administration to limit exports of engines jointly produced by General Electric and a French company.

“We don’t want to make it impossible to do business with us,’’ the president tweeted. “That will only mean that orders will go to someplace else. As an example, I want China to buy our jet engines, the best in the World....’’

Trump’s tweets followed a report in The Wall Street Journal that his administration was weighing a ban on shipments to China of a jet engine produced jointly by GE and the French company Safran SA.

The Commerce Department declined to comment.The White House did not immediately respond to requests for comment.

GE noted it has provided products and services globally for decades.

"We aggressively protect and defend our intellectual property and work closely with the U.S. government to fulfill our responsibilities and shared security and economic interests,” the Boston-based company said.

China is using the engines to develop its own airliner, Comac C919, to compete with Boeing and Airbus. According to the Journal, U.S. officials worry that Beijing could reverse-engineer the engine and enter the jet engine market. Another goal of the U.S. proposal reportedly is to slow development of the Comac airliner.

The episode marks the latest example of the administration’s often-chaotic approach to policy-making, with the president publicly and unexpectedly weighing in on ongoing deliberations, leaving businesses confused over where U.S. policy is headed.

“Uncertainty is death to trade,’’ Kevin Wolf, a former Commerce Department official who is now a partner at the Akin Gump law firm, said at a conference Tuesday on U.S. export controls, where the president's tweets caused a stir.