The New Horizons spacecraft is still sending back data from more than 4 billion miles away. 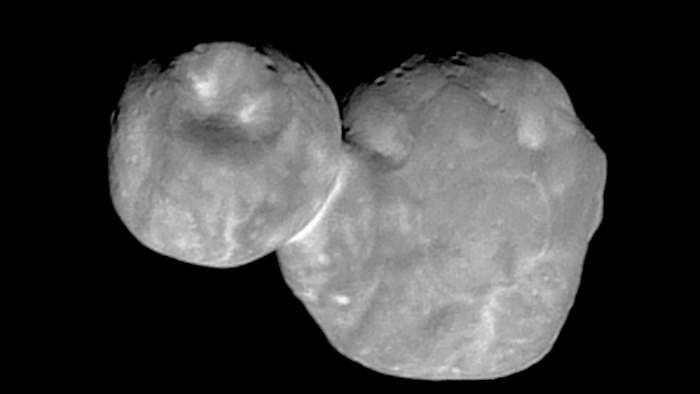 More than a year after its close encounter with the snowman-shaped object, the New Horizons spacecraft is still sending back data from more than 4 billion miles (6.4 billion kilometers) away.

"The data rate is painfully slow from so far away," said Will Grundy of Lowell Observatory in Flagstaff, Arizona, one of the lead authors.

Astronomers reported Thursday that this pristine, primordial cosmic body now called Arrokoth — the most distant object ever explored — is relatively smooth with far fewer craters than expected. It's also entirely ultrared, or highly reflective, which is commonplace in the faraway Twilight Zone of our solar system known as the the Kuiper Belt.

Grundy said in an email that to the human eye, Arrokoth would look less red and more dark brown, sort of like molasses. The reddish color is indicative of organic molecules.

While frozen methane is present, no water has yet been found on the body, which is an estimated 22 miles (36 kilometers) long tip to tip. At a news conference Thursday in Seattle, New Horizons' chief scientist Alan Stern of Southwest Research Institute said its size was roughly that of the city.

As for the snowman shape, it's not nearly as flat on the backside as previously thought. Neither the small nor big sphere is fully round, but far from the flatter pancake shape scientists reported a year ago. The research team likened the somewhat flattened spherical forms to the shape of M&Ms.

No rings or satellites have been found. The light cratering suggests Arrokoth dates back to the formation of the solar system 4.5 billion years ago. It likely was created by a slow, gentle merger between two separate objects that possibly were an orbiting pair. The resulting fused body is considered a contact binary.

This kind of slow-motion hookup likely arose from collapsing clouds in the solar nebula, as opposed to intense collisions theorized to form these planetesimals, or little orbiting bodies.

New Horizons flew past Arrokoth on Jan. 1, 2019, more than three years after the spacecraft visited Pluto. Originally nicknamed Ultima Thule, the object received its official name in November; Arrokoth means sky in the language of the Native American Powhatan people.

Launched in 2006, the spacecraft is now 316 million miles (509 million kilometers) beyond Arrokoth. The research team is looking for other potential targets to investigate. Powerful ground telescopes still under construction will help survey this part of the sky.

Emerging technology will enable scientists to develop a mission that could put a spacecraft in orbit around Pluto, 3 billion miles (5 billion kilometers) away, according to Stern. After a few years, that same spacecraft could be sent even deeper into the Kuiper Belt to check out other dwarf planets and objects, he said.

The New Horizons scientists reported their latest findings at the annual meeting of the American Association for the Advancement of Science, as well as in three separate papers in the journal Science.

David Jewitt of the University of California, Los Angeles, who was not involved in the studies, said a flyby mission like New Horizons, where encounters last just a few days, is hardly ideal.

“For future missions, we need to be able to send spacecraft to the Kuiper Belt and keep them there” in orbit around objects, Jewitt wrote in a companion piece in Science. That would allow “these intriguing bodies to be studied in stunning geological and geophysical detail," he noted.