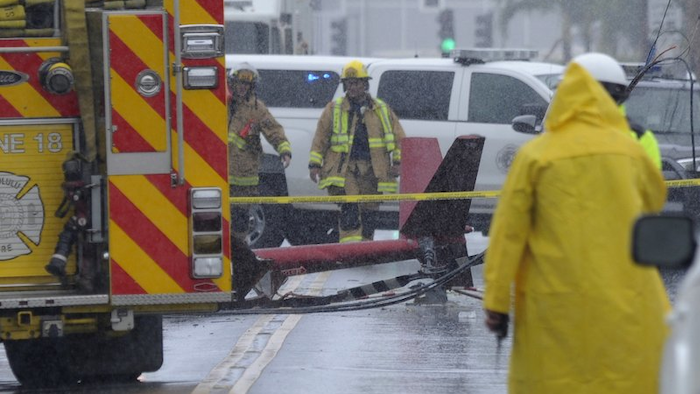 In this April 29, 2019, file photo, a portion of the tail section of a helicopter is shown after crashing in Kailua, Hawaii.
Bruce Asato/Honolulu Star-Advertiser via AP, File

HONOLULU (AP) — A whistleblower has told a Senate committee that a manager in the Federal Aviation Administration's Hawaii field office improperly let a helicopter tour company owner certify pilots for flight on behalf of the agency.

The owner then approved a pilot, who was at the controls 10 days later in April 2019 when a company aircraft crashed, killing all three people on board.

The allegation and others about managers at the Hawaii office, prompted a key senator to ask the Transportation Department’s Inspector General for an investigation.

Novictor Aviation has been involved in three crashes during the past two years, according to a Jan. 24 letter from Sen. Roger Wicker, a Mississippi Republican who chairs the Transportation Committee.

An FAA manager, in an interview Friday with The Associated Press, said the allegation that he improperly granted “check airman” status to Novictor's owner was incorrect. He accused the whistleblower of “making up stories again."

“The relationship between the Honolulu office and Novictor is one of professional commitment to safety and regulatory compliance,” Cox said in a statement. “A rogue, disgruntled inspector’s opinion is not representative of the facts.”

Allegations raised by the whistleblowers also include managers directing that investigative reports be altered, and management retaliation against an employee who reported the problems, according to the letter from Wicker to Inspector General Calvin Scovel III.

The committee says in a fact sheet on the case that its own investigation isn't complete, but it “raises significant concerns about the efficacy of FAA oversight in Hawaii.”

The FAA said Friday that it has been investigating on its own and already is taking steps to address problems that have been substantiated. It pledged to cooperate with Scovel's office.

The probe isn't the first time the FAA has been accused of being too cozy with aviation companies that it regulates. Legislators have said the agency gave too much inspection authority to Boeing Co. when it certified the 737 Max passenger jet to be able to fly.

The plane has since been grounded after crashes in Indonesia and Ethiopia that killed 346 people.

In June 2019, an FAA employee alleged misconduct by managers in the flight standards district office in Honolulu, saying that managers too frequently overrode recommendations of inspectors, according to the fact sheet.

A second employee contacted the committee in December with further allegations. The employee, Joseph Monfort — who the fact sheet said agreed to be publicly identified — alleged “some managers in the Hawaii FAA office have an inappropriately close relationship with Novictor Aviation, a helicopter tour operator in Hawaii."

In April, a Novictor tour helicopter crashed on a residential street outside Honolulu, killing all three on board.

“Mr. Monfort began an investigation into the crash, which revealed that Ms. Vandelaar had received her check airman certification from Mr. Kanayama improperly,” the fact sheet said. “According to Mr. Monfort, Ms. Vandelaar was improperly certified to administer check rides on behalf of the FAA, but subsequently gave a check ride to the pilot involved in the April 29th crash 10 days before the accident.”

Monfort revoked her authorization in May, and later that day was removed from the investigation, the fact sheet said.

“We were briefed about it and most of it is inaccurate,” Kanayama said Friday of the allegations. But later he said he misspoke when he denied the allegations. “We’re going to do an investigation and find out if it’s correct or incorrect," he said.

In September and November 2019, Monfort asked to travel to the island of Kauai to inspect Safari Aviation, a helicopter tour operator, the fact sheet said, and the requests were denied, making it “next to impossible” for him to perform adequate oversight.

On Dec. 26, a Safari Aviation tour helicopter crashed, killing all seven on board.

Monfort, a retired warrant officer helicopter pilot in the U.S. Army who began his FAA career in 2009, has filed a whistleblower retaliation complaint with the U.S. Office of Special Counsel.