The software verifies that monitors tracking key systems on the plane are working properly. 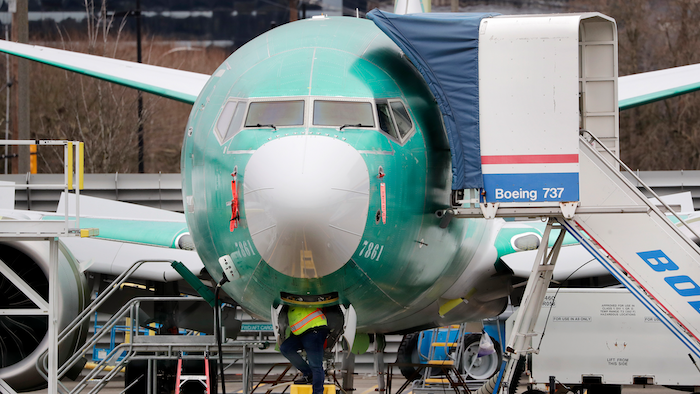 Boeing is working to fix a newly discovered problem with software powering up on the 737 Max, adding to the list of tasks the aircraft maker faces to get the grounded plane back in the air.

Boeing said Friday it has told the Federal Aviation Administration about the issue.

“We are making necessary updates and working with the FAA on submission of this change, and keeping our customers and suppliers informed,” Boeing said in a statement. “Our highest priority is ensuring the 737 MAX is safe and meets all regulatory requirements before it returns to service.”

A person with knowledge of the situation said the issue concerns software that verifies whether monitors tracking key systems on the plane are working properly.

The monitor check is supposed to happen automatically when the plane or system is powered up, but during a recent review, one of the monitors didn’t start up correctly, said the person, who spoke on condition of anonymity to discuss a detail that was not announced publicly.

The issue was discovered during a technical review that normally happens near the end of the software-development process, a sign that Boeing could be close to finishing changes designed to get the plane back in the air.

Boeing is rewriting software that played a role in crashes five months apart in Indonesia and Ethiopia that killed 346 people and led regulators to ground the plane worldwide in March 2019.

Boeing still must finish the software package, conduct one or more demonstration flights with FAA experts on board, and bring in airline pilots to test the changes it is making.

Separately on Friday, Fitch Ratings downgraded Boeing’s debt rating. It cited uncertainty about when the Max will fly again, the challenge of catching up on deliveries that were halted last April, rising debt, and risks posed by fines, lawsuits and a damaged reputation.

Moody’s Investors Service, which cut Boeing ratings on Dec. 18, signaled this week that another downgrade is possible because of a likely long and costly fight to regain confidence even if the Max returns to service relatively soon.

The Chicago-based company and new CEO David Calhoun are scheduled to report fourth-quarter financial results on Jan. 29. Some analysts, such as Ken Herbert of Canaccord Genuity, expect Boeing to announce a substantial new charge against earnings for the Max crisis.

“Now is the time for new CEO Calhoun to get as much bad news out as possible and to provide the company with some additional buffer heading into 2020,” Herbert wrote in a note to clients.

Boeing took a $5.6 billion charge in last year’s second quarter and has disclosed billions more in higher production costs because of the Max.

The grounding has caused Boeing to halt production of the plane, prompted investigations by the Justice Department and Congress, led to lawsuits by the families of passengers in the two crashes, and caused the firing of former CEO Dennis Muilenburg.

The release of internal communications has further damaged Boeing’s reputation, revealing that test pilots and other key employees had raised safety concerns about the Max. At least two said they wouldn’t put their own families on the plane.

The agency hopes to stay ahead amid concerning reports of increasingly aggressive behavior in space by China and Russia.
Oct 20th, 2020
Follow Us
Most Recent