ORLANDO, Fla. (AP) — A NASA contractor on Monday agreed to pay $375,000 in order to settle a whistleblower complaint that accused the company of falsely certifying that ground support equipment for a rocket launch system followed the space agency's requirements.

The U.S. Attorney's Office in Orlando said that United Paradyne Corporation reached the settlement over equipment it provided for NASA's Space Launch System rocket and the Orion space capsule, which will send astronauts beyond low-Earth orbit.

The company had agreed to manufacture equipment that would provide power, communications, coolant, fuel and stabilization to the rocket and capsule prior to launch. United Paradyne delivered the equipment without verifying or maintaining its cleanliness, even though it had falsely certified that it conformed to NASA requirements, federal prosecutors said.

The California-based company didn't respond to an email seeking comment. 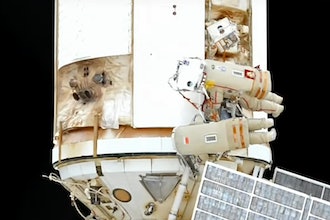 It has been nearly 20 years since the last supersonic passenger flight by Concorde.
August 16, 2022

It will assist Bridger Aerospace with the acquisition of four SuperScooper firefighting aircraft.
August 11, 2022