The company took 10 new orders in October, down from 24 in the same month last year, which included 14 now-grounded 737 Max jets. 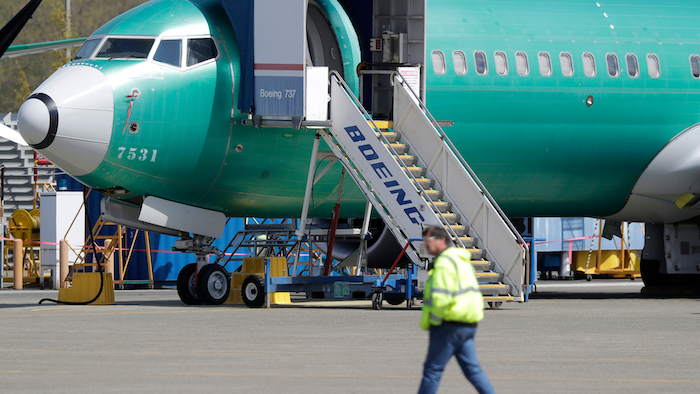 Orders and deliveries of new Boeing planes remain depressed eight months into the grounding of the company's 737 Max, leaving Boeing far behind Airbus, its chief competitor.

Boeing says that no customers have canceled orders because of the two deadly crashes involving the Max, but some orders have been switched to other Boeing models or lost because of airline bankruptcies.

Boeing said Tuesday that Air Lease Corp., which leases planes to airlines, replaced an order for 15 Max jets with an order for five 787s, a larger plane used mostly on international routes. An unidentified customer dropped an order for three Max planes after ordering a larger Boeing 777 earlier this year, Boeing said.

Chicago-based Boeing said it took 10 new orders in October, down from 24 in the same month last year, which included 14 Max jets.

The company delivered 20 commercial planes last month, including 12 for the 787, which Boeing calls the Dreamliner. That is down from 57 a year earlier.

Boeing's European rival, Airbus, said Tuesday that it took 415 orders in October, with 300 coming in one deal with IndiGo. The Indian discount carrier ordered planes in the Airbus A320neo family, planes that compete with the Max.

Airbus said it delivered 77 airliners last month, including 56 in the neo category.

The decline in deliveries is hurting Boeing's cash flow because customers pay much of the purchase price on delivery. In the third quarter, Boeing burned through $2.9 billion in cash, compared with generating $4.1 billion in free cash flow a year earlier, and it took on $5.5 billion in new debt.

Cai von Rumohr, an analyst with financial-services firm Cowen, said Boeing's deliveries were better than expected but orders were "lackluster." He said investors are more focused on when the Max will return to service and on the outlook for growth in global air traffic.

The Max has been grounded since March after two accidents killed 346 people. On Monday, Boeing said it hopes to resume deliveries of the Max in December and win Federal Aviation Administration approval of changes to the plane and a pilot-training course in January, clearing the way for the plane to return to service in the United States.

Regulators in other countries are expected to take longer.