Company says it's too early to know if it will cause further delay. 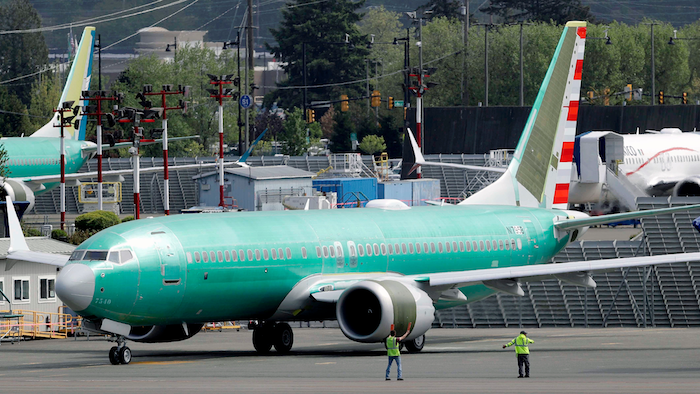 In this May 8, 2019, file photo workers stand near a Boeing 737 MAX 8 jetliner being built for American Airlines prior to a test flight in Renton, Wash. American Airlines CEO Doug Parker says his airline is feeling more confident that its grounded Boeing 737 Max jets will soon be approved to fly again.
AP Photo/Ted S. Warren, File

DALLAS (AP) — Regulators are asking Boeing to revise documentation of its proposed fixes to software on the 737 Max jet, and the company said Wednesday that it is too early to know whether the request will further delay the return of the grounded plane.

Boeing says it is in the final stages of making fixes to the Max, which has been grounded eight months after two crashes that killed 346 people.

The CEO of American Airlines, a major Boeing customer, said he is growing more confident that the Max will soon be approved to fly again.

Regulators began reviewing Boeing's technical documentation within the last week, and the audit has not been completed. The review involves specifications for software to use a second flight-control computer, not just one, on all flights.

"It's too early to speculate on how this might affect the schedule" for returning the Max to service, Johndroe said.

Boeing has already taken months longer than expected to make fixes to the plane, but it still aims for Federal Aviation Administration approval of its changes before the end of the year. The most important upgrade deals with software in a flight-control system called MCAS. Before both accidents, a faulty sensor triggered MCAS and caused it to push the plane's nose down; pilots were unable to regain control.

Pilots were not told about MCAS until after the first accident — it was not described in pilot manuals for the Max. Boeing assumed that pilots would use longstanding procedures for handling a nose-down pitch of the plane even if they didn't know what caused it.

"We build those manuals to try to train the pilots on how to respond to the effects of failures rather than diagnose failures," Boeing CEO Dennis Muilenburg said Wednesday at a New York Times conference.

A day earlier, Boeing Chairman David Calhoun said Muilenburg volunteered to refuse a bonus in 2019 and stock awards until the Max is back in full service, which Calhoun said would take at least a year.

Muilenburg said he will forgo "tens of millions of dollars ultimately" to take personal responsibility. Several relatives of passengers who died in the crashes have said Muilenburg should resign, a move the CEO has resisted.

Meanwhile, American Airlines CEO Doug Parker said nothing is certain about the Max's return, "but we feel a lot better about the fact that indeed the aircraft is going to get certified sometime in the near future. When it does, we will be ready."

Parker said at an investor conference in Chicago that he based his prediction on discussions American has held with Boeing and the FAA.

American is already selling flights on five of its Max jets as early as Jan. 15. Southwest Airlines is being more conservative, keeping the Max out of its schedule until Feb. 8.