Qantas Airways expects to have the planes flying again this year. 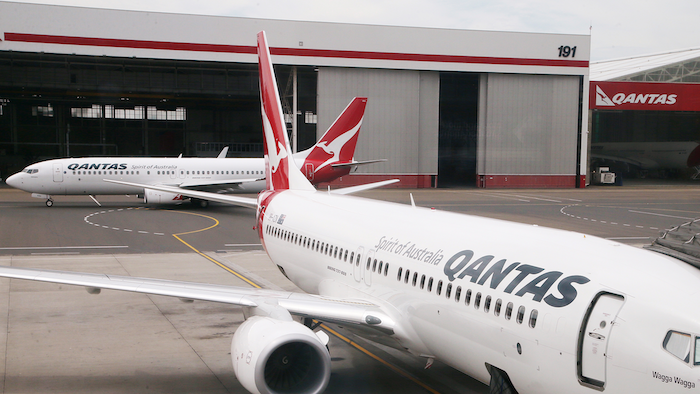 CANBERRA, Australia (AP) — Australian airline Qantas Airways said on Friday it grounded three of its Boeing 737s over hairline cracks found in wing structures but expected to have them flying again this year.

The airline has been inspecting its aircraft following calls this month from the U.S. Federal Aviation Administration for all airlines to check Boeing 737 NG planes that had completed more than 30,000 takeoff and landing cycles for cracking in a part that helps keep wings attached. These are different from the 737 MAX jets, which were grounded worldwide earlier this year.

Qantas Domestic and Freight Chief Executive Andrew David said the airline had examined in a week all 33 jets of the fleet of 75 that had completed more than 22,600 cycles in two and a half years of flying.

The hairline crack was found in one of eight bolts in the so-called pickle fork assembly in each of the three planes.

"Minimal risk, we are being very prudent, we've done the checks in seven days," David told reporters. "Those three aircraft are on the ground. We will get them back flying by the end of the year."

David said the airline would "have to make some minor schedule changes" while the aircraft were repaired.

David criticized the Australian Licensed Aircraft Engineers Association, the body representing the workers who carry out the checks, for calling on Thursday for all 75 of Qantas's 737s to be grounded while they were inspected.

David questioned why the association had not also called for rival domestic airline Virgin Australia to ground its fleet of 77 jets.

Virgin said on Friday it had inspected 19 of its 737s and found no cracks.

Association secretary Steve Purvinas on Friday maintained his call for all Qantas 737s to be grounded. Purvinas was critical of the airline for flying the third 737 for an additional day before the crack was discovered.

"They will not check these planes because they know very well if they find another cracked aircraft, it will be out of service until the end of the year as well, and that will cost them money," Purvinas told Australian Broadcasting Corp.

"If they're not an immediate risk, why aren't they allowed to fly any of these aircraft once the cracks have been found?" Purvinas added.

Purvanis said he did not expect Virgin to ground its fleet because the aircraft were younger than Qantas's and Virgin was more advanced in checking its 737s.

Qantas said it was working with Civil Aviation Safety Authority, the Australian aviation industry regulator, and Boeing to resolve this issue, which involved complex repair work.