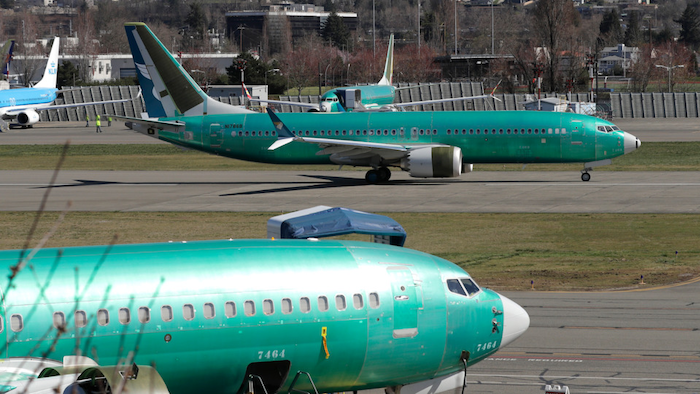 Boeing's stock extended its slide following revelations about internal concern over a flight system tied to two deadly crashes of its 737 Max jetliner.

Credit Suisse and UBS downgraded their ratings on Boeing's stock on Monday. Analysts cited Friday's disclosures that a senior Boeing pilot struggled while testing a new flight-control system called MCAS that has been implicated in both crashes.

The disclosure could complicate Boeing's ability to return the Max to service by shattering the trust between regulators and the company, Credit Suisse analysts said. They added that news coverage of the test pilot's messages could further undermine public confidence and hurt long-term demand for the plane.

Late last week, Boeing gave Congress and the Transportation Department messages and emails from 2016 in which the company's chief technical pilot for the 737 told a co-worker he struggled to handle MCAS in a flight simulator and "unknowingly" lied to regulators.

MCAS triggered a nose-down pitch of the planes before accidents in Indonesia and Ethiopia that killed 346 people.

Boeing said Sunday that that it understands and regrets the concern raised by the test pilot's comments. The company said it hasn't been able to talk to the pilot, who now works for Southwest Airlines, but it noted that the man's lawyer said the messages described problems he had with a simulator program.

Boeing is also under growing pressure from Congress. The House Transportation Committee obtained results of a 2016 survey in which more than one-third of Boeing employees polled reported feeling undue pressure from managers about approving work related to aircraft certification. Boeing CEO Dennis Muilenburg is scheduled to testify before the committee Oct. 30.