The legroom you'll get on a future flight could be decided by 720 Oklahomans taking part in a first-of-its-kind test. 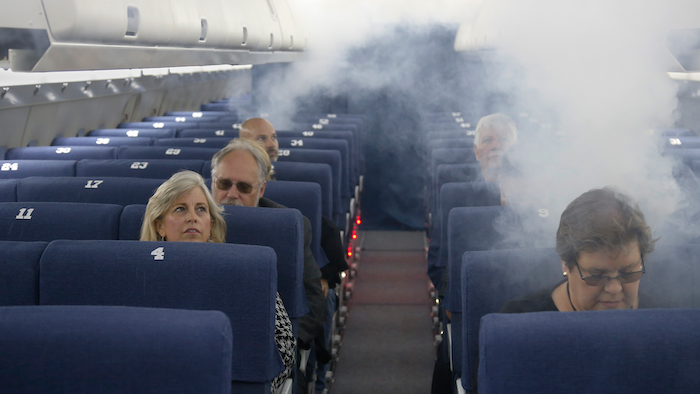 FAA employees participate in a demonstration of an airline cabin filling with smoke in a simulator at the FAA Civil Aerospace Medical Institute in the Mike Monroney Aeronautical Center, Oklahoma City, Oct. 17, 2019.
AP Photo/Sue Ogrocki

OKLAHOMA CITY (AP) — The size of your seat and how much legroom you'll get on a future flight could be decided by 720 Oklahomans taking part in a first-of-its-kind test to determine if jam-packed planes slow emergency evacuations.

Frequent flyers on U.S. airlines are all too aware that cramped economy cabins are detrimental to comfort. But federal officials who write airline safety rules have never tested whether smaller seats or tightly packed rows have any effect on evacuation time.

"It is a big pet peeve of flyers, but that doesn't necessarily mean that there is a safety issue," said Stacey Zinke-McKee, a medical-research official at the Federal Aviation Administration facility in Oklahoma City where the tests are being conducted.

Beginning next month, FAA researchers will recruit people from churches, universities and online to come up with a test group similar to the overall U.S. population. Sixty at a time, they will be seated in a simulator laid out like a Boeing 737 or an Airbus A320, planes commonly used on domestic flights.

Flight attendants will tell them to get out of the simulator — money will be paid to the first ones off to mimic the sense of panic that occurs in an emergency. Then the seats and rows will be reconfigured, and they will run the tests again — four times with each group of 60 volunteers.

The researchers will compare tests to see if smaller seats or tighter rows make any difference. A dramatic difference would presumably be reason for FAA to set more generous minimum standards for the airlines to follow. An FAA rulemaking panel will use that data to help set seating standards for airlines, with a decision possible by late next year.

The average American adult is about 10 pounds (4 1/2 kilograms) heavier than just two decades ago, according to government figures, and airlines are squeezing more passengers into the economy cabin to make more room for high-paying customers in business class. That means tighter rows in the back of the plane.

Congress last year ordered the FAA to set minimums for seat sizes and the distance between rows.

Airlines "are cramming in more and more and more seats, closer and closer together. People are getting bigger," House Transportation Committee Chairman Peter DeFazio, D-Ore., told the FAA's deputy administrator at a hearing last month. "I don't believe we can meet the standard anymore" for rapid evacuations.

The distance from any point on a seat — say, the front of the armrest — and the same spot on the seat in the next row is called pitch, and pitch has been shrinking. A few years ago, the standard was around 34 inches (86 centimeters). Today in the economy cabin of U.S. airlines it is more often around 30 or 31 inches (76 to 79 centimeters), and even tighter on some, including Spirit Airlines.

Planes are also more crowded. The average flight now is about 85% full — it was 88% on Delta over the summer — and during peak hours every seat is taken.

Consider also that more passengers carry bags on board, and hundreds of thousands of them bring an emotional-support animal too, and it stands to reason that it will take longer to get everybody out during an emergency.

Until last year, the FAA resisted calls to set minimum seat and row standards, saying those are matters of passenger comfort, not safety, and it's a safety regulator.

The FAA's Deputy Administrator Daniel Elwell agreed at last month's congressional hearing that Americans are getting bigger, but he noted that in two recent accidents that destroyed planes — a 2014 Asiana crash in San Francisco that killed three passengers, and a 2018 Aeromexico crash in Durango, Mexico, with no deaths — other passengers were able to evacuate safely.

"Survivability today is much, much better," he said.

Since the 1980s, the FAA has taken steps to make evacuations faster. It shortened the distance between emergency exits, it improved access to smaller exits like those over the wings — under pressure from Congress — and it required airlines to judge whether people sitting in exit rows can physically operate the door and help others get out.

By this time next year, we might know whether minimum seat sizes and legroom will be added to that list.