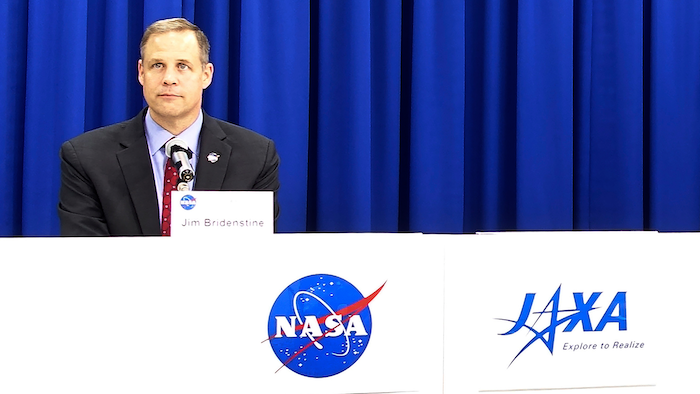 TOKYO (AP) — The head of NASA said Wednesday that space security is necessary so that the United States, Japan and others can safely explore the moon and Mars.

NASA Administrator Jim Bridenstine also said during his Tokyo visit that he wants to take the U.S. space partnership with Japan to a new level by stepping up cooperation by going to the moon and eventually to Mars together.

But he said that will be possible only if space is kept a safe place.

"NASA fully supports the idea of space security," he said.

Japan and the U.S. have long cooperated in space science, including the ongoing International Space Station program.

"All of our partners and allies should understand how important space is and understand that we will do what is necessary to preserve it," Bridenstine said. "And to the extent that NASA and JAXA continue to explore space, it will only be because it is secure."

On Tuesday, NASA and the Japan Aerospace Exploration Agency, or JAXA, confirmed Japan's participation in America's lunar and Mars exploration projects, including an Artemis lunar mission.

The U.S. and Japanese governments are expanding their security alliance into space amid China's growing activity.

Bridenstine said it's time to advance to the next stage — sustainable human presence on the moon, and eventually on Mars. He said he has high expectations for Japan's contribution to future missions.

Bridenstine said he is in Japan to gain Japanese support, including funding, for the manned moon mission planned for 2024.

Responding to a question about the feasibility of sending astronauts to the moon in three years, he said NASA would rather accelerate the timing to avoid the political risk of taking too long to get the program achieved.

Also Tuesday, a Japanese rocket blasted off from a JAXA launch site in southern Japan to deliver powerful new lithium-ion batteries for the space station.

The shipment should arrive at the space station Saturday for spacewalking astronauts to replace old-style batteries with new ones.

JAXA is among several organizations making periodic deliveries to the space station.