He says many things need to come together to meet the "aggressive goal." 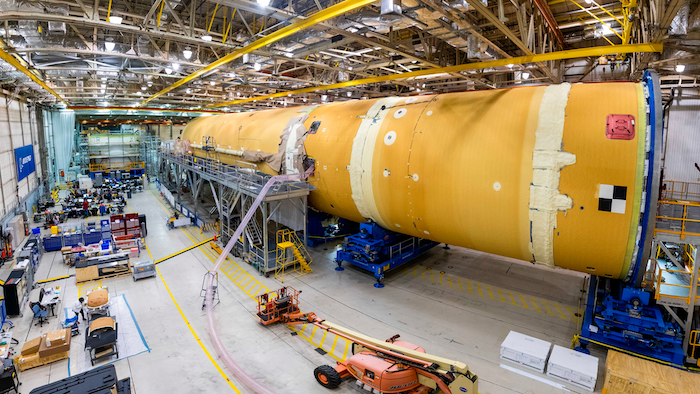 This August 2019 photo released by NASA, shows the core stage for NASA’s Space Launch System (SLS) rocket at the agency’s Michoud Assembly Facility in New Orleans. Kenneth Bowersox, acting associate administrator for human exploration, is casting doubt on the space agency's ability to land astronauts on the moon by 2024. Bowersox told a Congressional subcommittee Wednesday, Sept. 18, 2019, that NASA is doing its best to meet the White House-imposed deadline. But he says he wouldn't bet anything on it.
Eric Bordelon/NASA via AP

CAPE CANAVERAL, Fla. (AP) — A top NASA manager cast doubt Wednesday on the space agency's ability to land astronauts on the moon by 2024.

Kenneth Bowersox, acting associate administrator for human exploration and operations, told a Congressional subcommittee that NASA is doing its best to meet the White House-imposed deadline. But he noted: "I wouldn't bet my oldest child's upcoming birthday present or anything like that."

Bowersox — a former space shuttle and space station commander — said it's good for NASA to have "that aggressive goal." Many things need to come together, like funding and technical challenges, he said, for 2024 to stand a chance.

"What's important is that we launch when we're ready, that we have a successful mission when it launches, and I'm not going to sit here and tell you that just arbitrarily we're going to make it," he said in response to questioning by U.S. Rep. Bill Posey, R-FLorida. "There's a lot of risk in making the date, but we want to try to do it."

The Trump administration urged NASA in March to accelerate its latest moon-landing plans by four years to 2024. The request came a few months ahead of the 50th anniversary of the first lunar footsteps by Apollo 11's Neil Armstrong and Buzz Aldrin.

NASA has named the program Artemis after Apollo's twin sister in Greek mythology and promises the first moonwalking team will include a woman. The pair would land on the lunar south pole, where vast reserves of frozen water could be tapped for future explorers. NASA Administrator Jim Bridenstine — who's pushing Artemis every chance he gets — stresses the goal is sustainability this time around, with the moon serving as a critical training ground for Mars expeditions, perhaps in the 2030s.

NASA's replacement for the Apollo-era Saturn V rocket — the Space Launch System or SLS — is still in development. Its launch debut has slipped repeatedly and, according to Bowersox, will now occur no earlier than the end of next year. This initial test flight will send an Orion capsule around the moon with no one on board.

The space agency still needs to come up with new lunar landers, rovers and spacesuits.

U.S. Rep. Michael Waltz, R-Florida, asked during the space subcommittee hearing why it's taking so long and costing so much for NASA "to get back to where we were" during Apollo. The last Apollo mission to the moon was in 1972.

Doug Cooke, a former NASA exploration manager now running his own consulting business, said engineers often want to include new technologies and ideas, and therefore the program gets "trapped in that to some degree."

He favors a simpler Apollo-like approach for getting astronauts back to the moon, requiring fewer launches and critical maneuvers than envisioned under the Artemis program. NASA's proposed mini outpost around the moon known as Gateway, from which astronauts would descend to the lunar surface, should be delayed until later missions, according to Cooke.

Cooke pointed out the obvious anxiety in Mission Control during the Apollo moon landings.

As for whether private companies like SpaceX might beat NASA to the moon, Bowersox said, "I'd still bet on us — but they might be part of our program."