The instrument will provide high-sensitivity, high-spatial and high-temporal resolution measurements of coastal and ocean ecosystems. 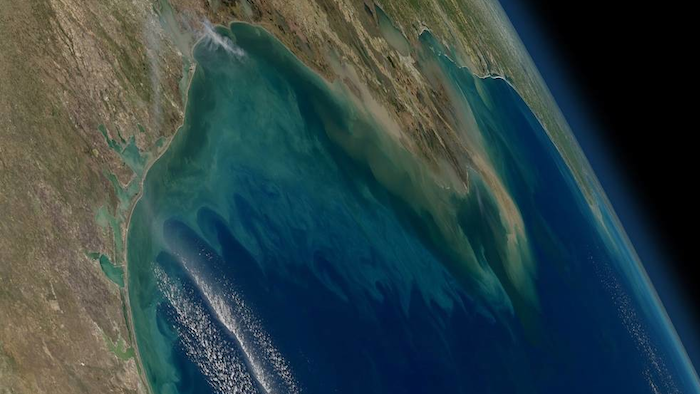 NASA's Geosynchronous Littoral Imaging and Monitoring Radiometer (GLIMR) instrument will collect high-resolution observations of coastal ecosystems in such areas as the northern Gulf of Mexico, shown in this image with phytoplankton blooms stretching from the Texas and Louisiana coast (left) across the Mississippi River delta (center) toward Florida (far right).
NASA

Raytheon will build the Geostationary Littoral Imaging and Monitoring Radiometer (GLIMR) sensor, under a contract from the University of New Hampshire.

Hyperspectral imaging collects and processes information from across the electromagnetic spectrum including visible light, infrared and ultraviolet frequencies to create a highly detailed view of physical and biological conditions in coastal waters.

The instrument will provide high-sensitivity, high-spatial and high-temporal resolution measurements of coastal and ocean ecosystems in the Gulf of Mexico, parts of the southeastern U.S. coastline and the Amazon River plume.

Decision-makers will use the GLIMR data to respond rapidly to natural and man-made coastal water disasters, such as harmful algae blooms and oil spills. It will also help improve the coastal ecosystem's sustainability and resource management.

"GLIMR will collect the sharpest and most colorful view of physical and biological conditions in coastal waters ever seen from GEO," said Jeff Puschell, GLIMR instrument scientist and principal engineering fellow at Raytheon Space Systems. "A hyperspectral imager is essential technology to capture new insight about our changing coastal ecosystems."

The University of New Hampshire is NASA's lead organization for the GLIMR contract. The instrument will launch aboard its host spacecraft in the 2026-2027 time frame. Its data will be available to scientists, researchers and educators around the world.