Without these batteries (each weighing 100-plus pounds) Apollo 11 would have never left the pad, let alone reached the moon. 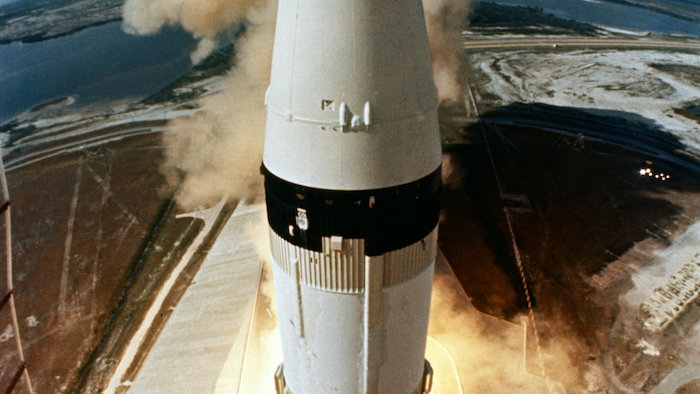 In this July 16, 1969 photo made available by NASA, the 363-feet Saturn V rocket carrying the Apollo 11 crew, launches from Pad A, Launch Complex 39, at the Kennedy Space Center in Florida.
NASA via AP

JOPLIN, Mo. (AP) — Carried to the moon by the Apollo 11 spacecraft and left behind when it departed is a plaque bearing the signatures of the mission's three astronauts — Neil Armstrong, Buzz Aldrin and Michael Collins, as well as the signature of President Richard Nixon. (View photos here.)

There are several more signatures tucked away on the moon, hidden inside a lunar module's descent stage, and one them belongs to Carl Junction resident Carroll Wheat.

Wheat, a mechanical engineer, joined EaglePicher in 1963. The Joplin-based company was responsible for making batteries used in the triple-staged Saturn V rocket, the Apollo command module and the lunar module that went to the moon. Each battery was tested and installed by EaglePicher technicians at Kennedy Space Center in Florida.

Before Apollo 11 launched, Wheat was responsible for activating the four batteries for its lunar module. He explained that each battery was nested inside a case and the lids to these cases had to be removed prior to battery activation.

There also were back-up batteries there in case they were needed for Apollo 11.

"We had one of these lids off (a back-up battery) ... ahead of time, and we scratched our names (on the inside of the cover)," Wheat said, adding that neither he nor an engineer from Grumman who was working with him dared sign the outside part of the lid. "But we made sure it was a battery that was going to be used on (an Apollo moon) flight."

"And (the battery's) still sitting up there," Wheat said with a note of pride.

Fifty years ago, Armstrong and Aldrin landed the lunar module Eagle on the surface of the moon. Nearly seven hours later, Armstrong stepped onto the lunar soil. The moon landing is considered one of the greatest technological achievements in human history, watched live by hundreds of million people around the world.

Without those EaglePicher batteries — each one tipping the scales at 100-plus pounds — Apollo 11 would have never left the pad, let alone reached the moon. 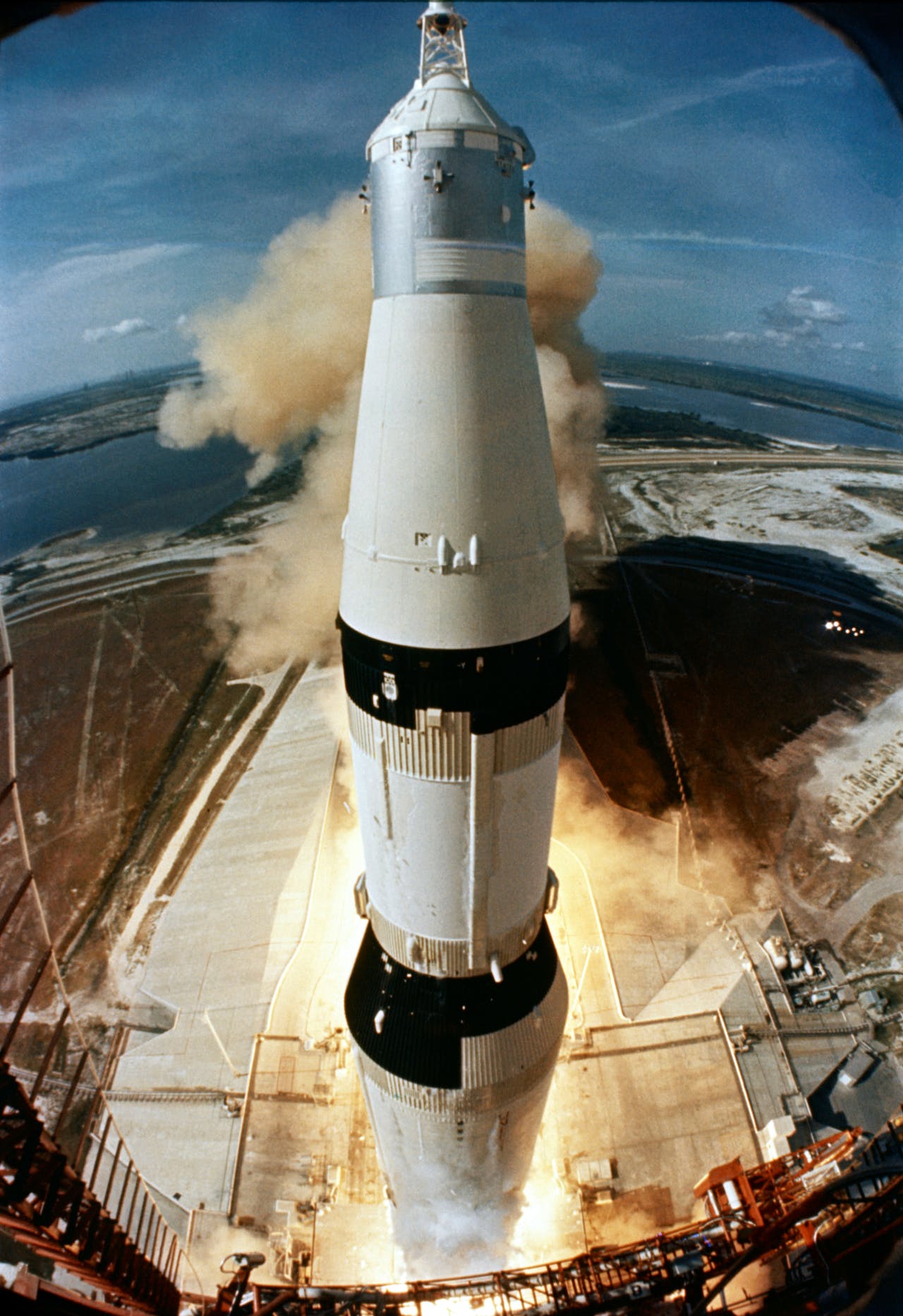 In this July 16, 1969 photo made available by NASA, the 363-feet Saturn V rocket carrying the Apollo 11 crew, launches from Pad A, Launch Complex 39, at the Kennedy Space Center in Florida.NASA via AP

"I don't know whether people have really grasped the fact that it took electrical power to operate these things; it's almost like the life blood," Wheat told the Joplin Globe , adding that each Saturn V rocket alone had roughly 3 million moving parts. "I'm proud of what EaglePicher accomplished."

EaglePicher has been part of this country's climb into space from the beginning, and was on board in 1958 with the launch of Explorer 1, the country's first satellite, less than four months after the Soviet Union launched Sputnik.

Approximately 248 EaglePicher batteries were used during the entire Apollo program, Wheat said, including the seven Apollo moon shots. The final three Apollo missions — 15, 16 and 17 — each carried additional batteries to power an extra day's stay on the moon.

Although Apollo 13 never made it to the moon, six other missions did, and 33 EaglePicher batteries were left behind on the Moon between 1969 and 1972, divided between the six descent stages and the three lunar rovers, a type of lunar dune buggy.

Rex Erisman, who moved to Joplin to work as a test engineer for EaglePicher in 1965 — the same year the company received the contract to provide batteries for the Apollo program — said he didn't give the assignment much weight at first; it was just another engineering task.

"We were 25-year-old kids," he said. "We didn't know anything about rockets or space or the moon or anything."

But that would soon change.

"We went along, (as) we found out what we were working on, there were instances of more quality control on the product — more and more," Erisman said. "(The National Aeronautics and Space Administration) started sending astronauts around, and we'd give tours to some of the them, and the excitement began to grow closer to launch time. By the time launch time got here, it was quite exciting. People were really getting interested, not only us at EaglePicher but everyone around the world."

Erisman, who would retire from EaglePicher as executive vice president and general manager of operations, said he was one of the "lucky ones."

He witnessed the morning launch of Apollo 11 from Kennedy Space Center. Beside him for the historical event were his wife and 3-year-old son. It's a memory they cherish.

"The night before, we were at the hotel — you couldn't pick up a radio or go out to eat without something going out about the flight," Erisman said. "So we decided we'd better go out there and see what was going on. At 10 p.m., we went out to the causeway and it was already full of cars."

Making a snap decision, they went back to their hotel, checked out, and then drove back out to the causeway, finding a vacant spot. There, beneath the stars, they waited for the 9:32 a.m. launch.

"We stayed all night out there — with a 3-year-old," Erisman said. "It was just like a party out there — a million people viewed the launch."

Though they stood 5 miles from the launch pad, he still remembers the powerful rumble as the Saturn V rocket blasted off from Earth.

"You could feel the (rocket) from (that distance). You could see it and feel the excitement bubble. The engines went off, (Apollo 11) went up into the clouds — and then it was over," he said with a chuckle.

Like Wheat, one of Erisman's jobs was to activate the batteries prior to Apollo launches. They worked out of the Manned Spacecraft Operations Building on Merritt Island, which also was the location of the astronaut's crew quarters.

"It was quite an honor to be around those guys, especially the astronauts," Erisman said.

Joplin's Jack Brill was another EaglePicher mechanical engineer who worked on the Apollo batteries. Like Wheat and Erisman, he never had doubts concerning a potential battery failure.

"I always felt confident that we did enough testing on those batteries to know what they would do," he said. Tests included dynamic vibration shock and even spinning them on a centrifuge. The latter spun so fast, Brill said, "it would scare you to stand beside it."

Following the Apollo 1 disaster, in which three NASA astronauts lost their lives inside an Apollo capsule during a fire, the spacecraft was redesigned to make each component fireproof.

"We redesigned all the batteries to make sure there was nothing flammable — no flame to catch anything (around it) on fire." Earlier batteries had emitted hydrogen gas, Brill said, something that potentially — although the risk was remote — could set off a spark. "We got rid of that, minimized the volume of the gas and materials around it so it would not burn.

"The batteries were safe. We never had a problem with the batteries on launch," he added.

EaglePicher batteries have been used on hundreds of U.S. and international projects before and after Apollo, including missions to Mars and the Hubble Space Telescope. The company states on its website that it has more than 2.6 billion cell hours in space without a mission failure. More recently, EaglePicher batteries help power the OSIRIS-REx mission, an effort to land on the asteroid Bennu and bring home a sample. EaglePicher batteries also are powering the InSight lander on Mars, although they were built at the company's plant in Rhode Island.

Wheat said that following a successful launch from Florida, the engineers would fly briefly back to Joplin before heading on to Houston to keep tabs of the batteries during the missions' duration at Johnson Space Center. During a stay in Houston, a NASA employee asked Wheat why he wasn't wringing his hands with worry. There was nothing to worry about, he told the man.

"I don't know of any time during that whole program that an (EaglePicher) battery failed to deliver the power and the capacity or the energy required to the mission," Wheat said. "And that's pretty good."

EaglePicher wasn't the only local company with ties to the Apollo moon landings. Neosho-based Rocketdyne became a major supplier of engines for the Saturn V rocket that took American astronauts to the moon. Engines were built in Neosho and tested nearby. Rocketdyne's H-1 engine was used by the Saturn I booster main stage. Five F-1 engines powered the Saturn V's S-IC first stage, while five J-2 engines powered its S-II second stage, and one J-2 the S-IVB third stages.

According to the website heroicrelics.org, after Rocketdyne ceased operations at the plant in 1968, it was used for jet engine turbine repair and component overhaul by a series of companies including Continental/Teledyne, Sabreliner, and Dallas Airmotive/Premier Turbines.

A mural — designed and painted by former Rocketdyne employee Lawrence Sanchez in 1963 that includes an Apollo-era capsule — now sits inside Davidson Hall at Crowder College outside Crowder's science classrooms and labs. For 50 years, the mural was displayed on Rocketdyne's cafeteria wall.