The Senate confirmed Stephen Dickson to lead the Federal Aviation Administration on a party-line vote. 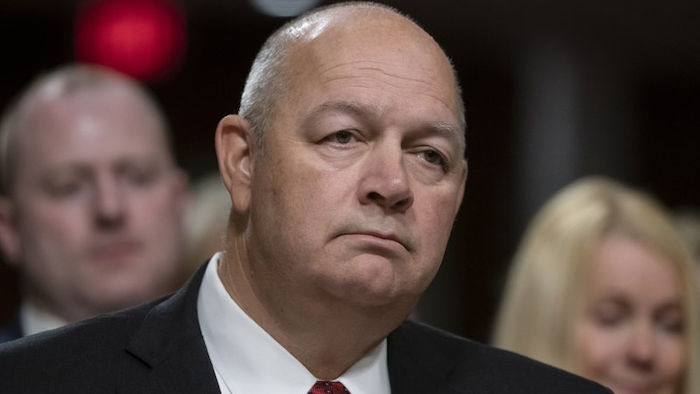 In this May 15, 2019, file photo, Stephen Dickson appears before the Senate Committee on Commerce, Science, and Transportation for his confirmation hearing on Capitol Hill.
AP Photo/J. Scott Applewhite, File

A former Air Force pilot and Delta Air Lines executive was confirmed Wednesday by the Senate to lead the Federal Aviation Administration after overcoming opposition from Democrats who claim that he mistreated a whistleblower during his tenure at Delta.

The 52-40 vote on Stephen Dickson broke along party lines.

The FAA has been without a confirmed administrator since January 2018 and has been led since then by an acting chief, former American Airlines pilot Daniel Elwell.

Dickson spent 27 years at Delta, first as a pilot and later overseeing pilots as the senior vice president of flight operations until he retired last fall. President Donald Trump nominated him in March after publicly pondering the possibility of picking his personal pilot for the job.

Airline industry trade groups also lauded Dickson's confirmation. Nicholas Calio, president of Airlines for America, said Dickson "has the vision, knowledge and experience to lead the FAA at this crucial time for the agency and for commercial aviation."

The FAA has come under fire for relying on Boeing employees to conduct tests and inspections that led to approval of the Boeing 737 Max in 2017, and for declining to ground the plane for more than four months after a fatal crash in Indonesia. The FAA was the last global aviation regulator to ground the plane after a second crash, which happened in March in Ethiopia.

Dickson appeared to be cruising toward confirmation until Democrats on the Senate Commerce, Science and Transportation Committee learned of his involvement in a whistleblower case while at Delta. An experienced pilot who raised safety concerns to Dickson and another executive claimed that as retaliation, Delta ordered her to go through a psychiatric exam.

Sen. Maria Cantwell, D-Wash., said Dickson removed the pilot from flying, showed a lack of candor by not disclosing the matter until the whistleblower came forward, and then falsely played down his role in her case.

"It is clear to me he is not the right person for the safety culture that we need today at the FAA," Cantwell said Tuesday. She said voting against Dickson will "help us create an environment where whistleblowers will be listened to."

Dickson said he didn't mention the case because he was not a defendant.

The pilot who claims retaliation, Karlene Petitt, was grounded for more than a year until outside experts overruled Delta's hand-picked doctor and determined she was mentally fit to fly. She is now suing Delta in a Labor Department proceeding.

Although not named in the case, Dickson gave a daylong deposition last October in which he defended Delta's handling of the matter, including the psychiatric referral.

The FAA confirmed one of Petitt's complaints — that Delta failed to count commuting time toward limits on a pilot's work day. Those limits that are designed to prevent pilots from flying while tired. Delta said it now counts that time in the work day.

In May, the FAA notified Petitt's attorney that it was investigating another of her complaints to Dickson — that Delta failed to fully enact an FAA-required safety-management system. Such systems are supposed to encourage employees to report safety issues without fear of retaliation.